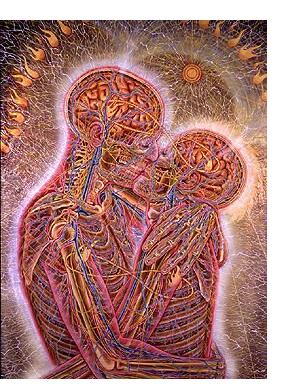 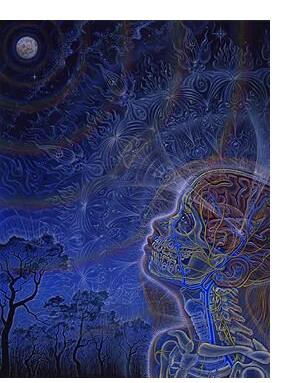 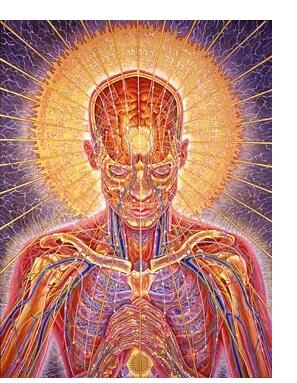 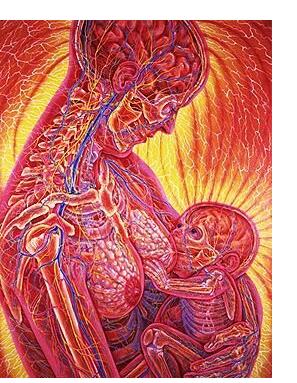 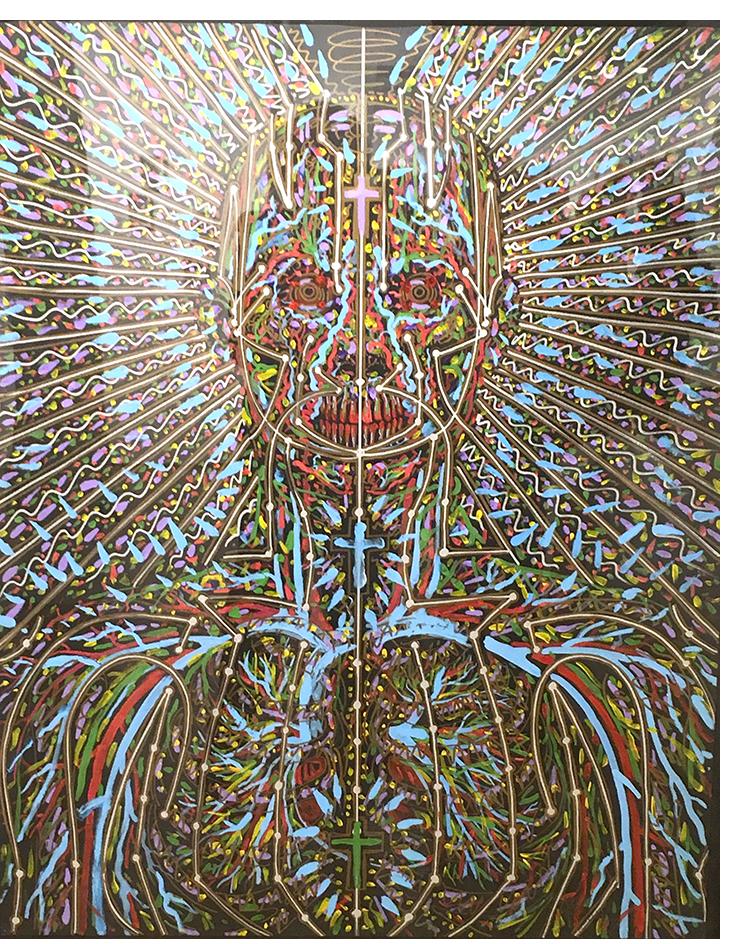 Alex Grey was born in Columbus, Ohio on November 29, 1953 (Sagittarius), the middle child of a gentle middle-class couple. His father was a graphic designer and encouraged his son's drawing ability. Young Alex would collect insects and dead animals from the suburban neighborhood and bury them in the back yard. The themes of death and transcendence weave throughout his artworks, from the earliest drawings to later performances, paintings and sculpture. He went to the Columbus College of Art and Design for two years (1971-73), then dropped out and painted billboards in Ohio for a year (73-74). Grey then attended the Boston Museum School for one year, to study with the conceptual artist, Jay Jaroslav.

At the Boston Museum School he met his wife, the artist, Allyson Rymland Grey. During this period he had a series of entheogenically induced mystical experiences that transformed his agnostic existentialism to a radical transcendentalism. The Grey couple would trip together on LSD. Alex then spent five years at Harvard Medical School working in the Anatomy department studying the body and preparing cadavers for dissection. He also worked at Harvard's department of Mind/Body Medicine with Dr. Herbert Benson and Dr. Joan Borysenko conducting scientific experiments to investigate subtle healing energies. Alex's anatomical training prepared him for painting the Sacred Mirrors (explained below) and for doing medical illustration. When doctors saw his Sacred Mirrors, they asked him to do illustration work. Grey was an instructor in Artistic Anatomy and Figure Sculpture for ten years at New York University, and now teaches courses in Visionary Art with Allyson at The Open Center in New York City, Naropa Institute in Boulder, Colorado, the California Institute of Integral Studies and Omega Institute in Rhinebeck, New York.

In 1972 Grey began a series of art actions that bear resemblance to rites of passage, in that they present stages of a developing psyche. The approximately fifty performance rites, conducted over the last thirty years move through transformations from an egocentric to more sociocentric and increasingly worldcentric and theocentric identity. The most recent performance was WorldSpirit, a spoken word and musical collaboration with Kenji Williams which was released in 2004 as a DVD.

Grey's unique series of 21 life-sized paintings, the Sacred Mirrors, take the viewer on a journey toward their own divine nature by examining, in detail, the body, mind, and spirit. The Sacred Mirrors, present the physical and subtle anatomy of an individual in the context of cosmic, biological and technological evolution. Begun in 1979, the series took a period of ten years to complete. It was during this period that he developed his depictions of the human body that "x-ray" the multiple layers of reality, and reveal the interplay of anatomical and spiritual forces. After painting the Sacred Mirrors, he applied this multidimensional perspective to such archetypal human experiences as praying, meditation, kissing, copulating, pregnancy, birth, nursing and dying. Grey’s recent work has explored the subject of consciousness from the perspective of “universal beings” whose bodies are grids of fire, eyes and infinite galactic swirls.

Renowned healers Olga Worral and Rosalyn Bruyere have expressed appreciation for the skillful portrayal of clairvoyant vision his paintings of translucent glowing bodies. Grey's paintings have been featured in venues as diverse as the album art of TOOL, SCI, the Beastie Boys and Nirvana, Newsweek magazine, the Discovery Channel, Rave flyers and sheets of blotter acid. His work has been exhibited worldwide, including Feature Inc., Tibet House, Stux Gallery, P.S. 1, The Outsider Art Fair and the New Museum in NYC, the Grand Palais in Paris, the Sao Paulo Biennial in Brazil. Alex has been a keynote speaker at conferences all over the world including Tokyo, Amsterdam, Basel, Barcelona and Manaus. The international psychedelic community has embraced Grey as an important mapmaker and spokesman for the visionary realm, .

A large installation called Heart Net by Alex and his wife, Allyson, was displayed at Baltimore's American Visionary Art Museum in 1998-99. A mid-career retrospective of Grey's works was exhibited at the Museum of Contemporary Art, San Diego in 1999. The large format art book, Sacred Mirrors: The Visionary Art of Alex Grey has been translated into five languages and has sold over one hundred thousand copies, unusual for an art book. His inspirational book, The Mission of Art, traces the evolution of human consciousness through art history, exploring the role of an artist's intention and conscience, and reflecting on the creative process as a spiritual path. 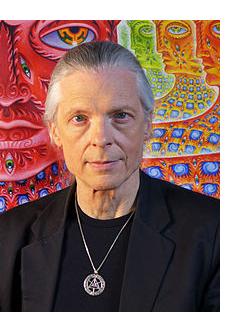