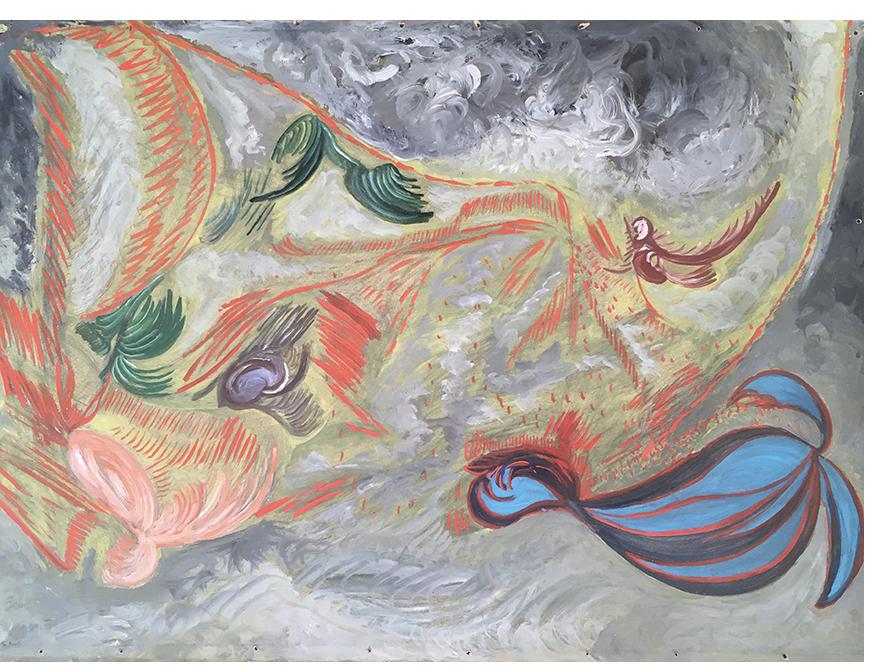 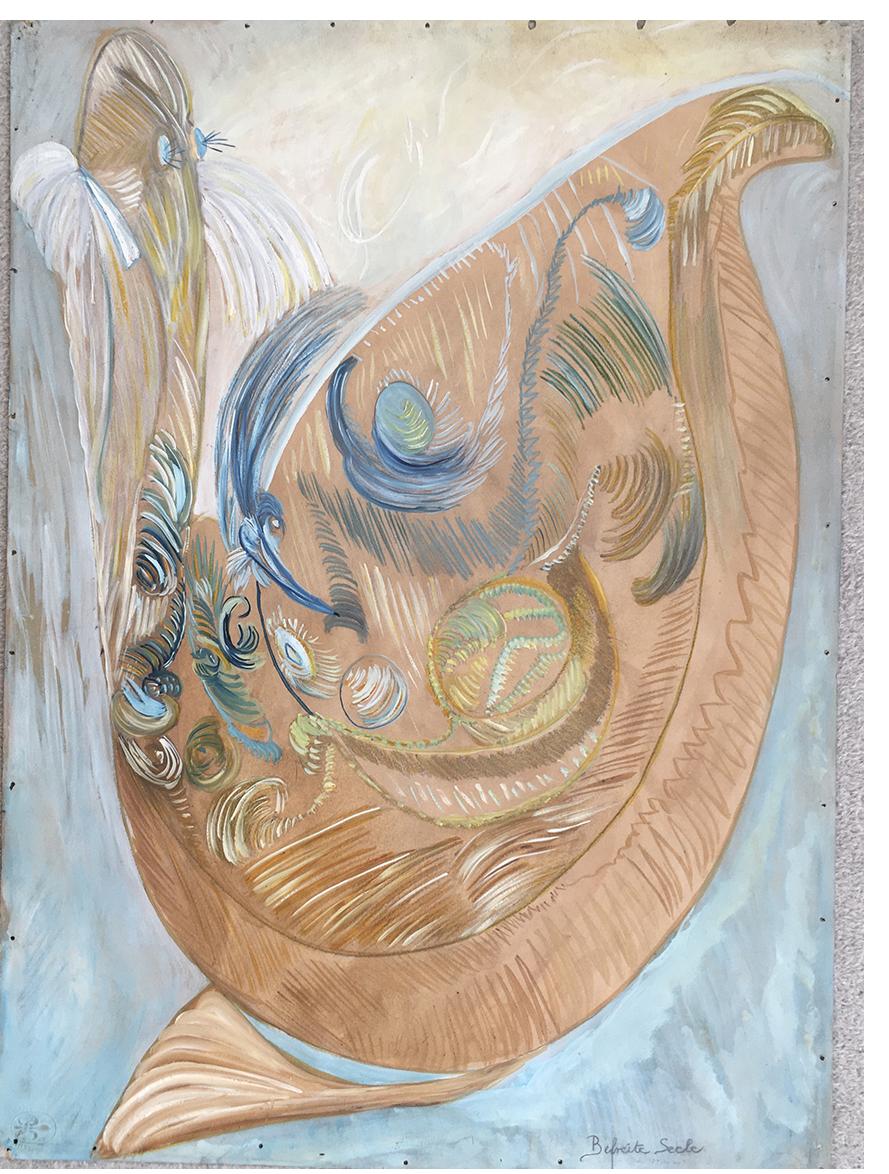 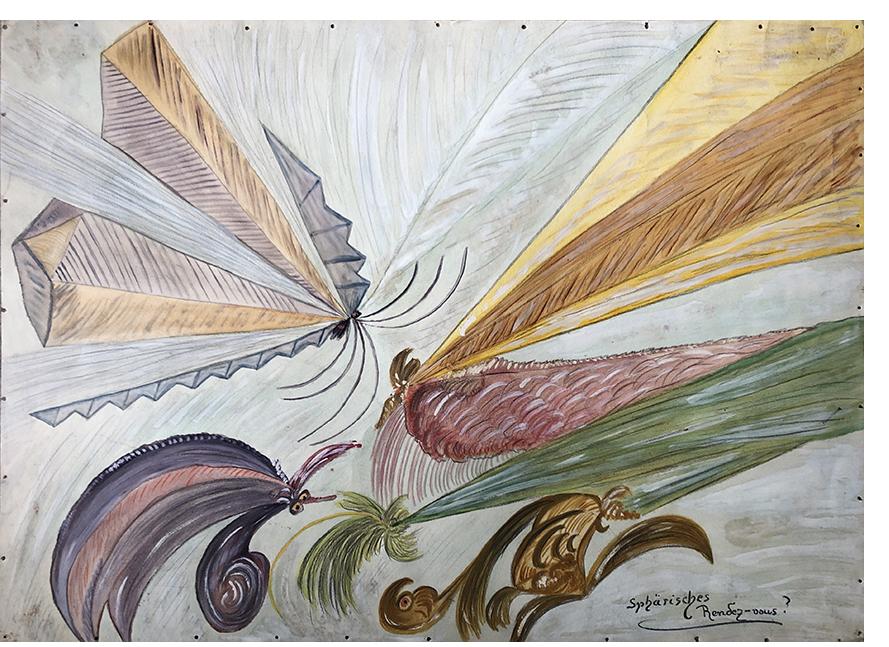 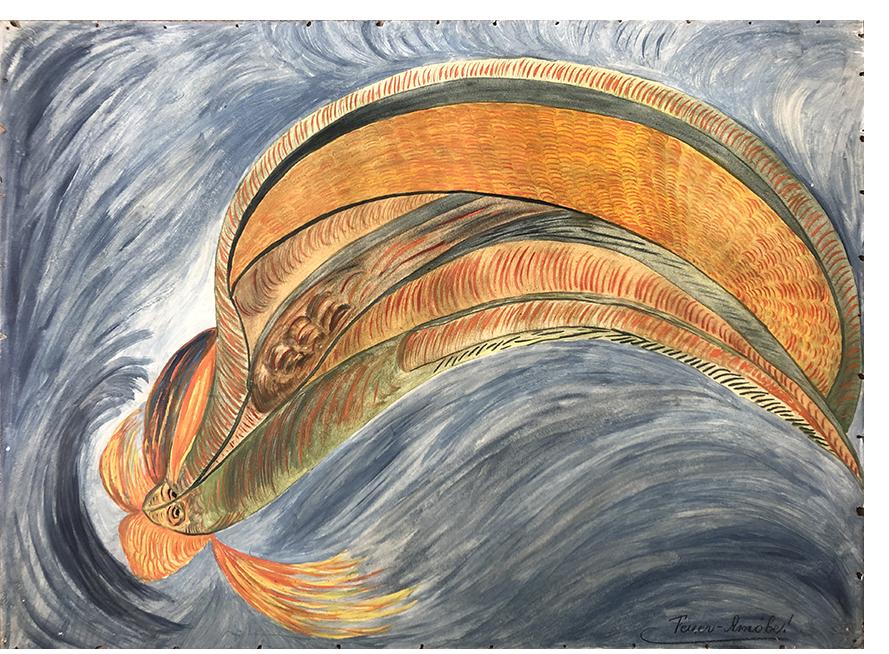 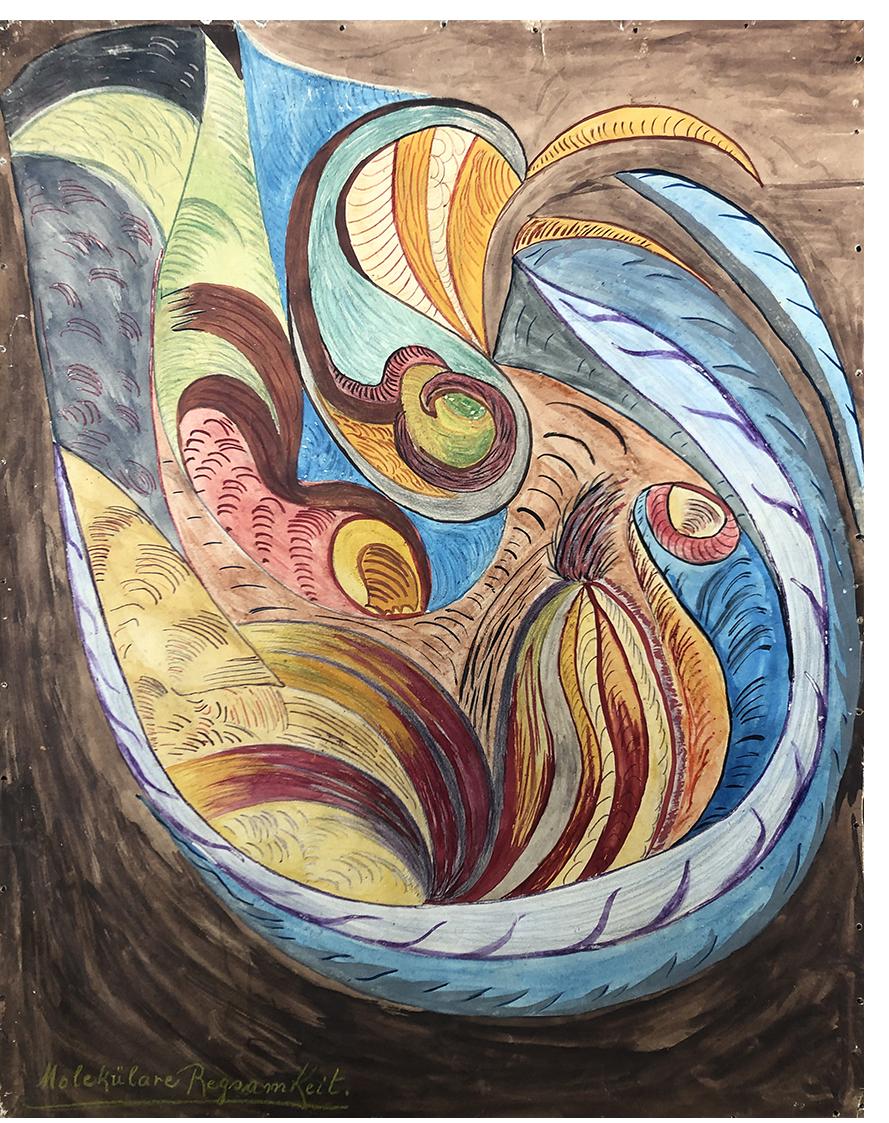 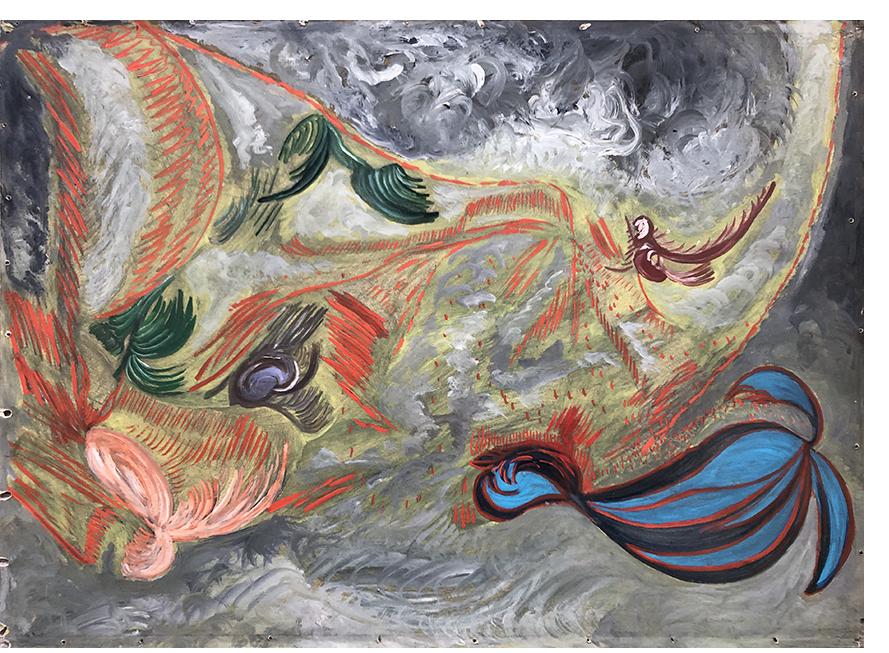 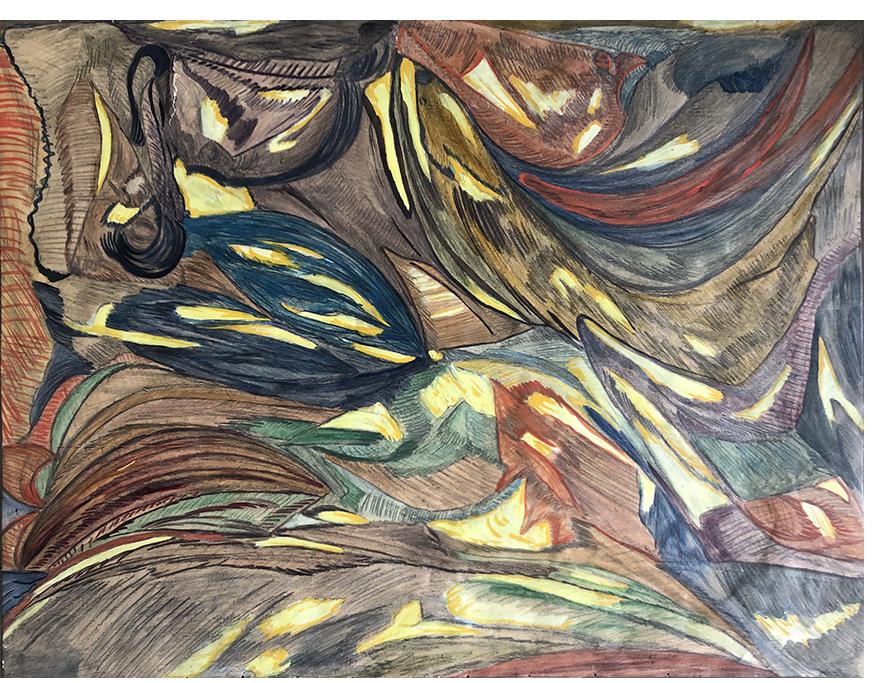 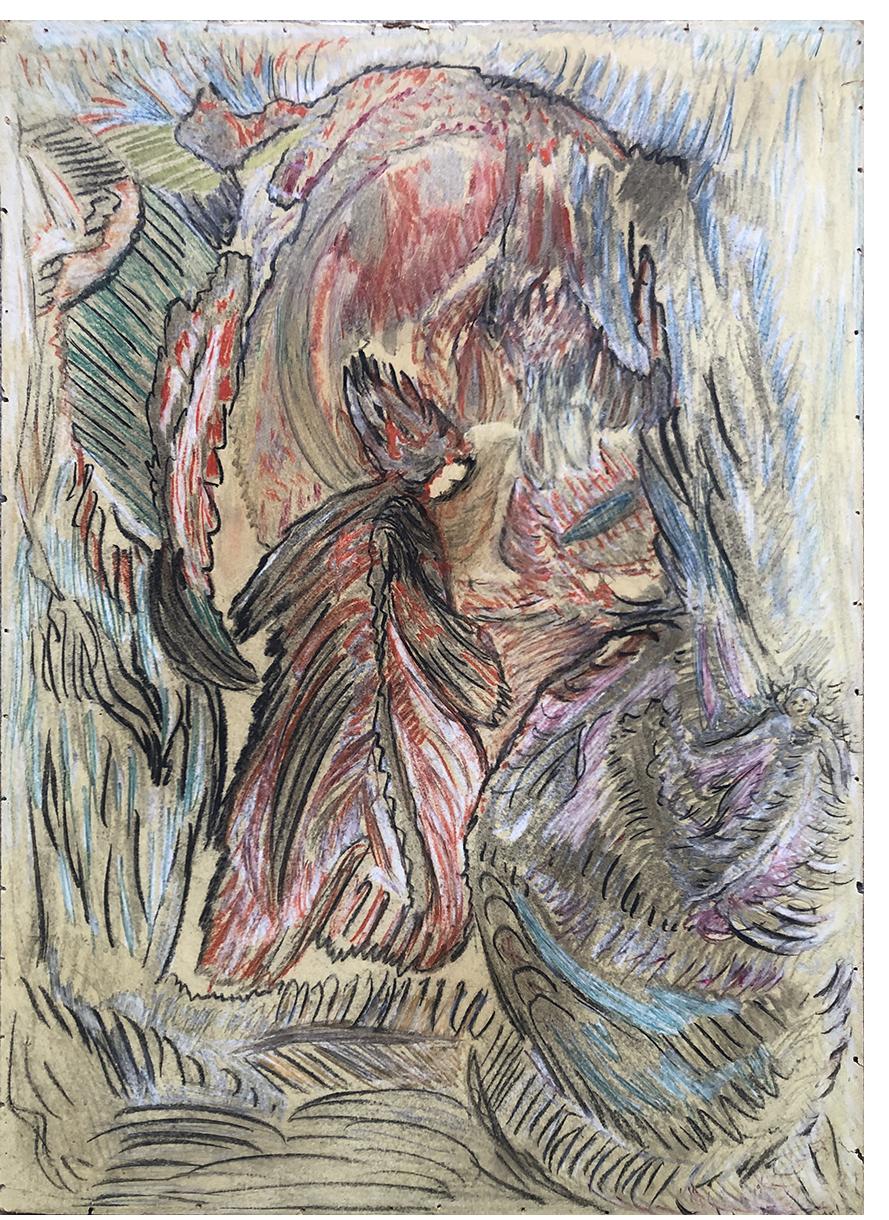 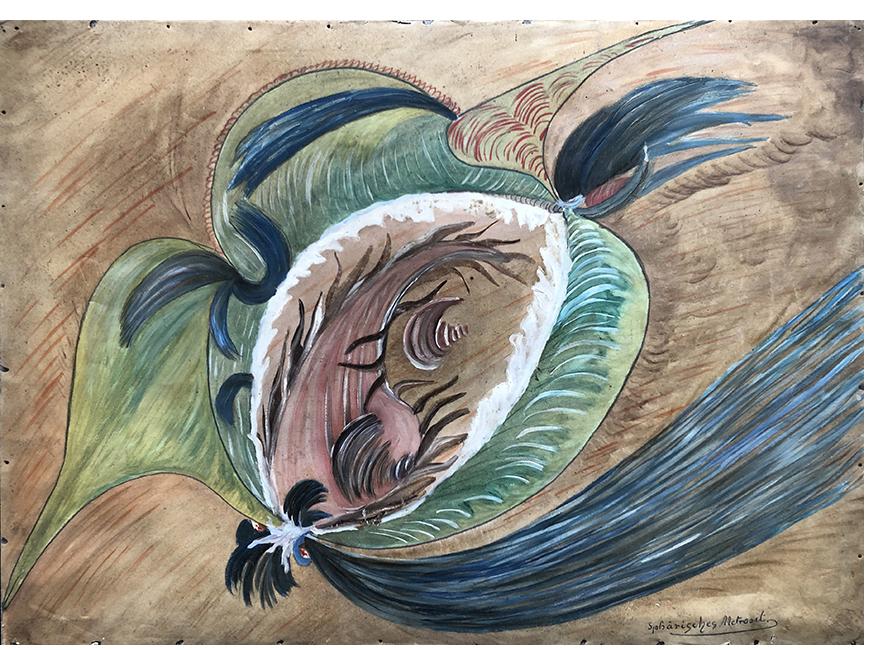 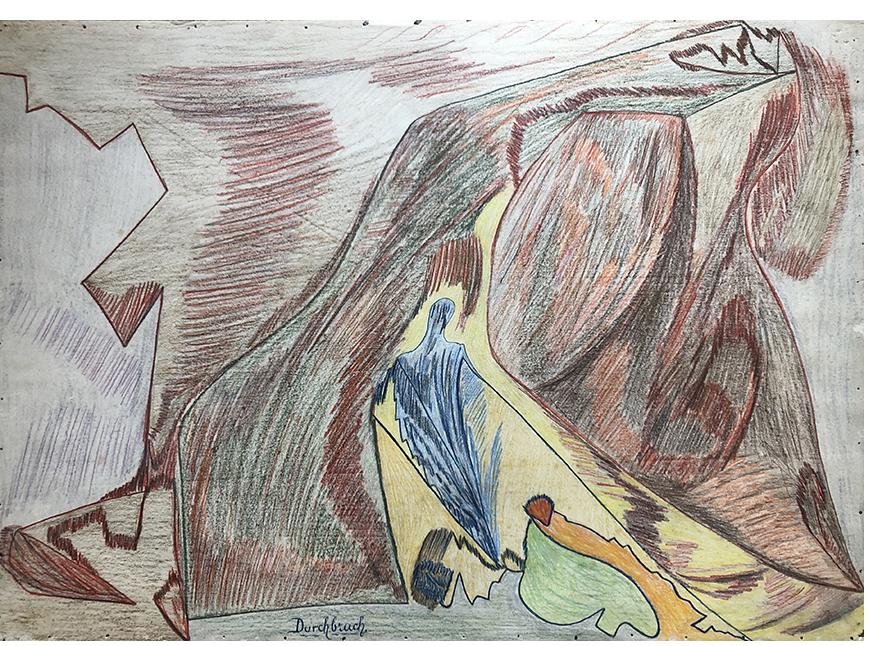 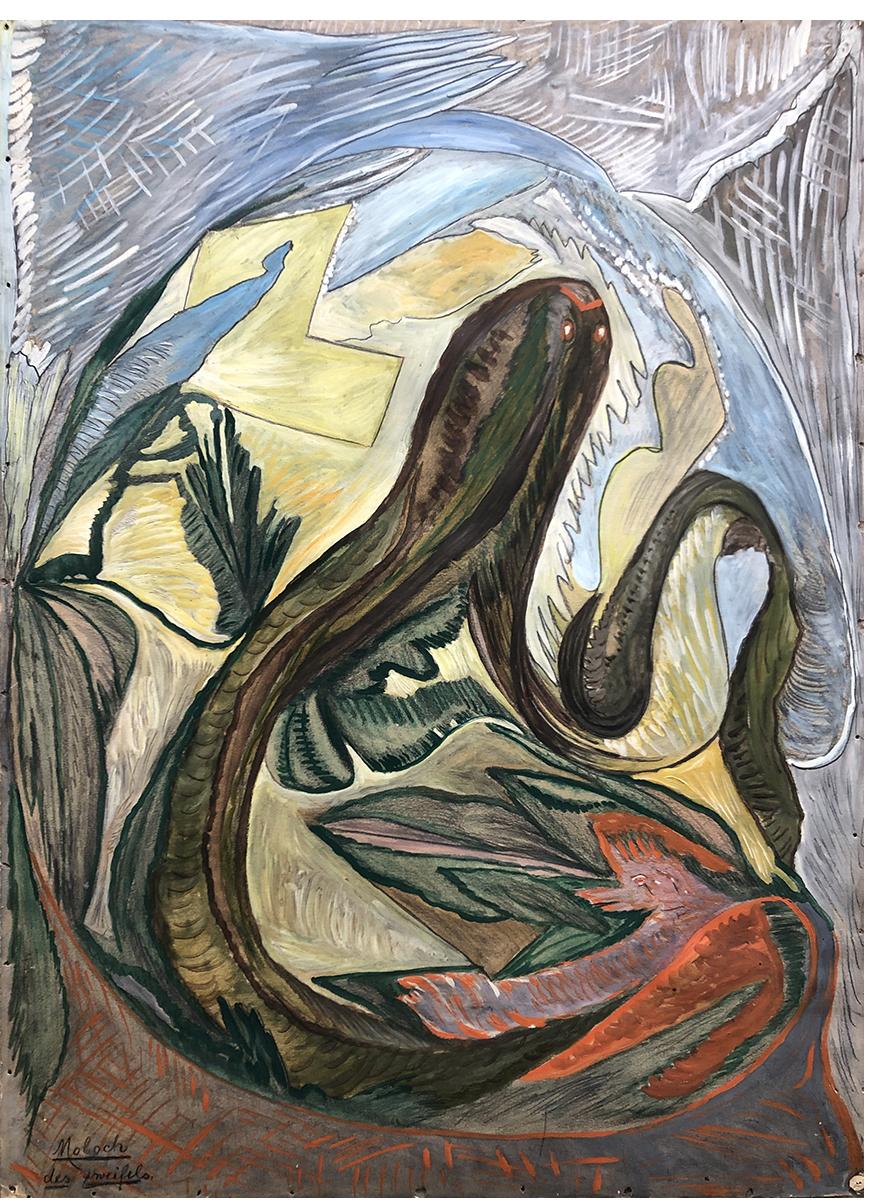 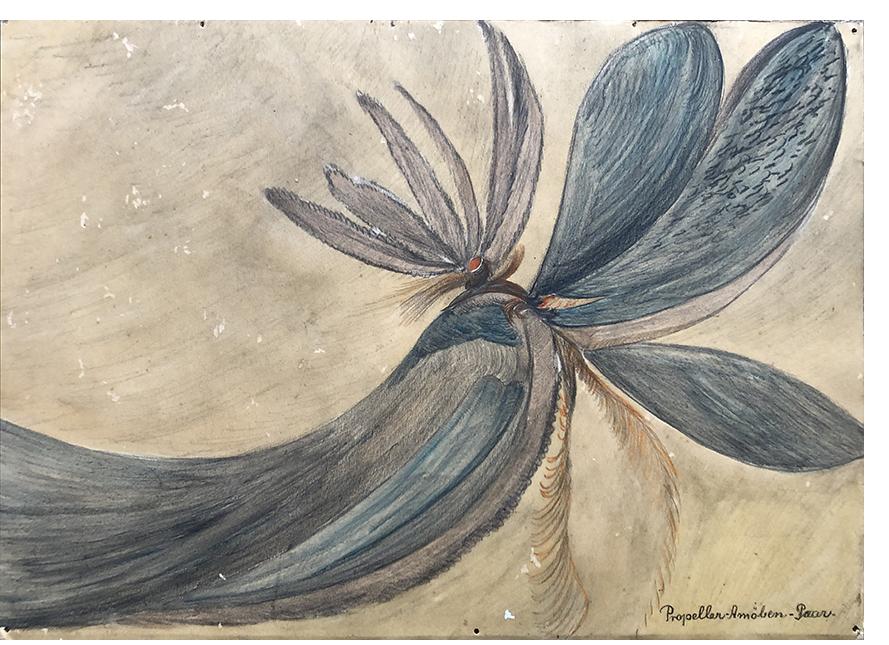 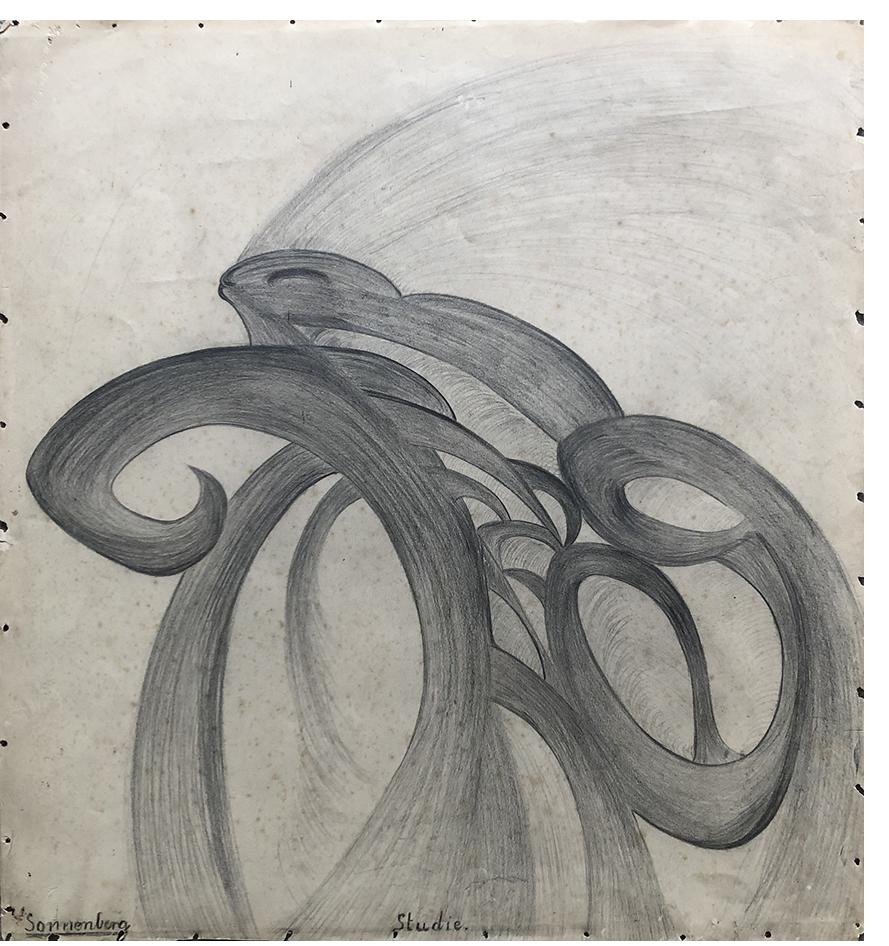 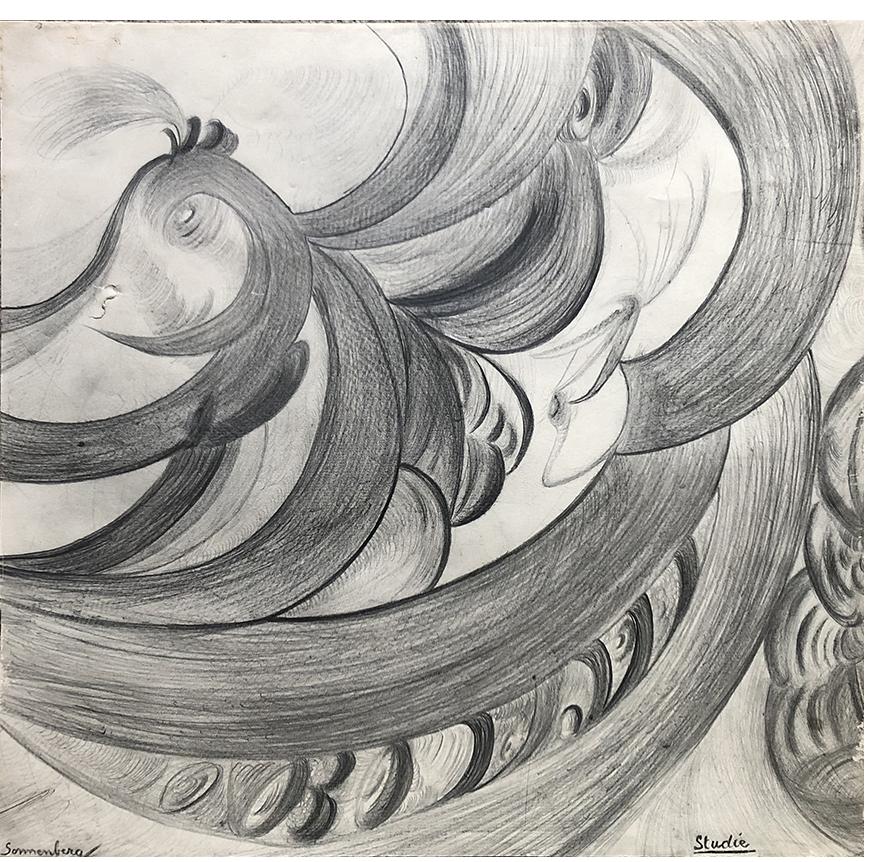 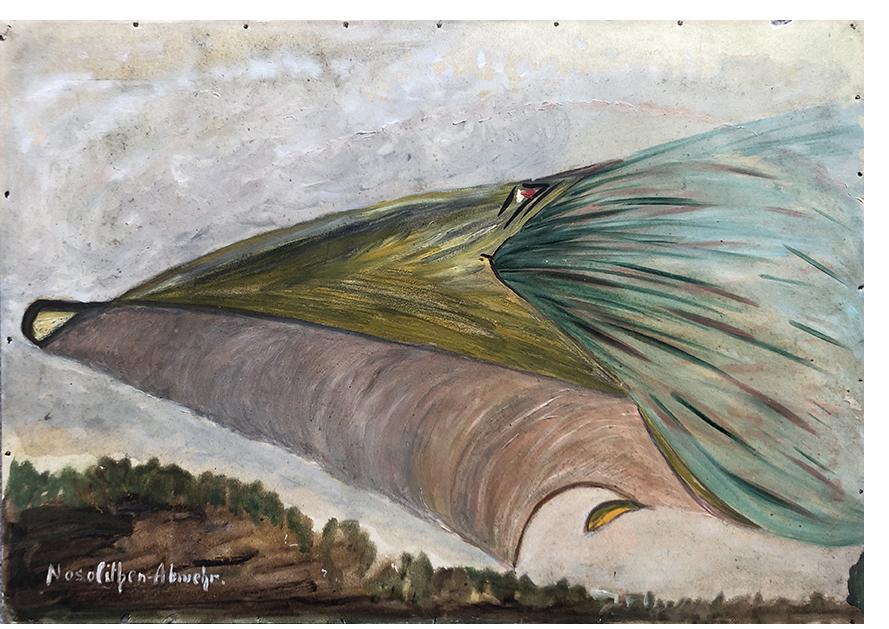 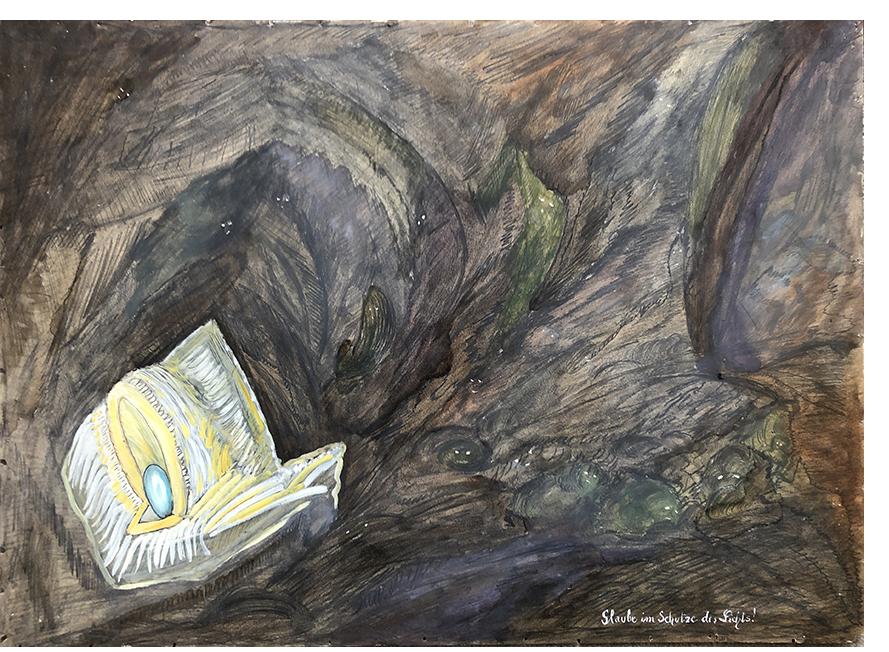 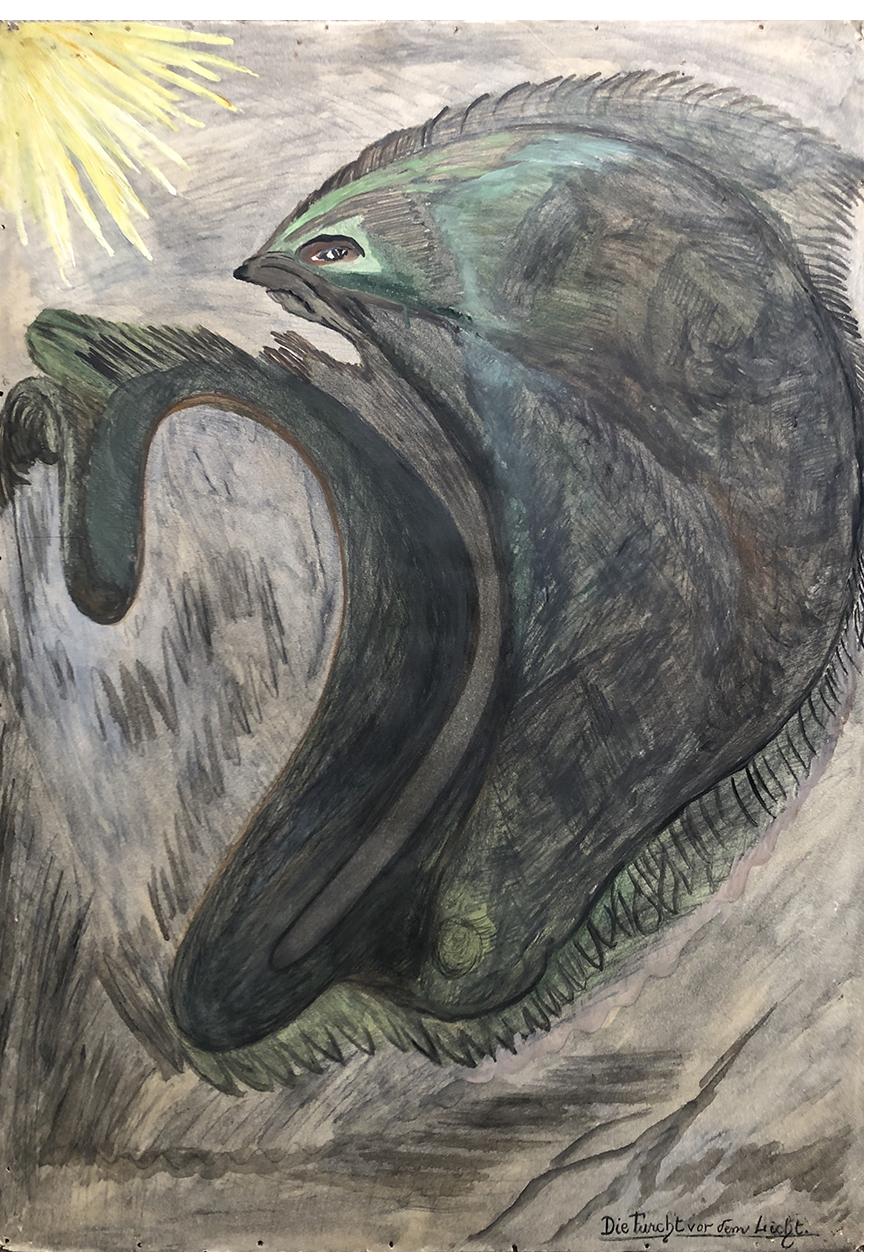 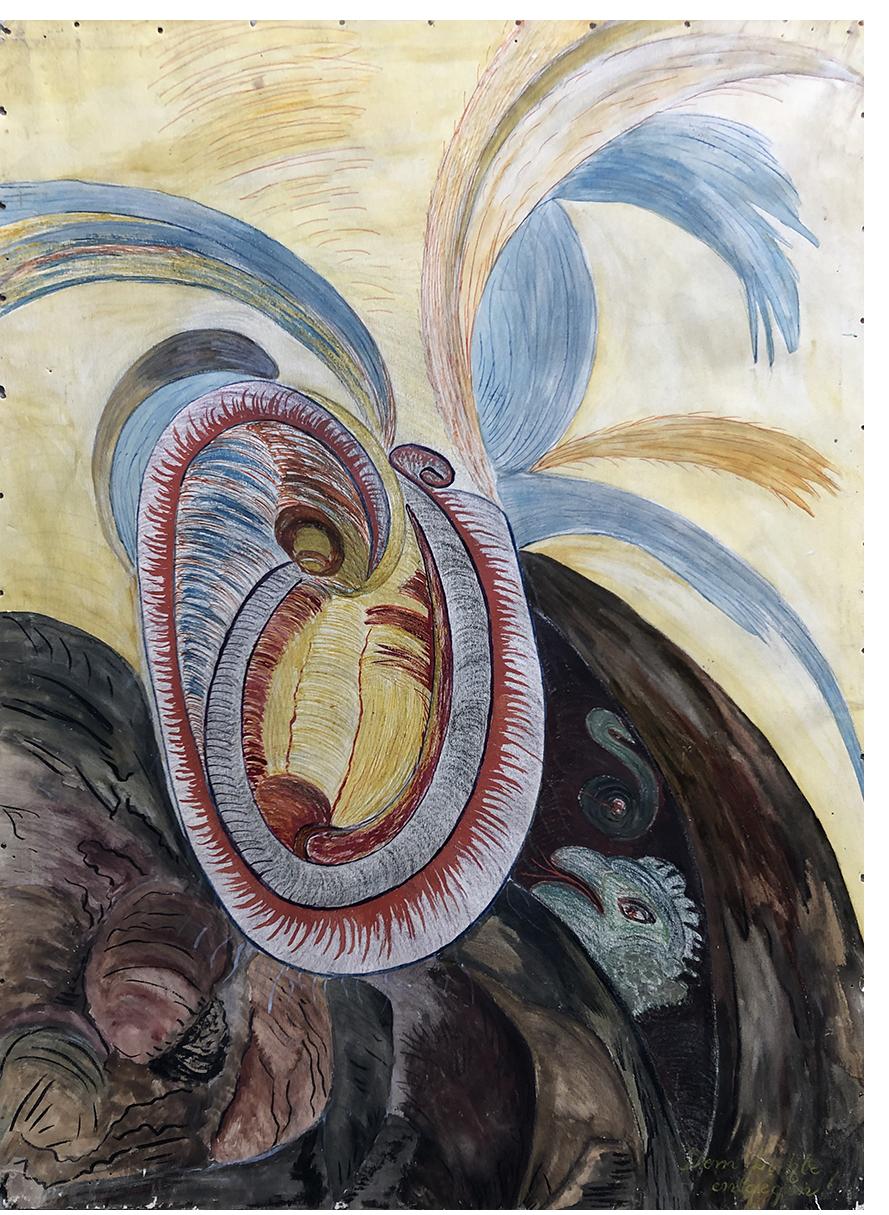 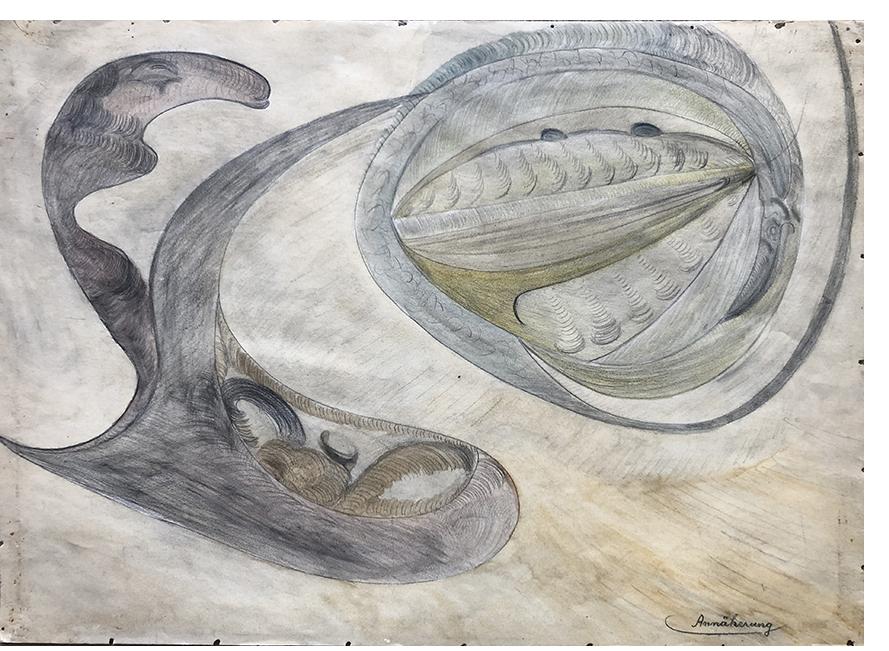 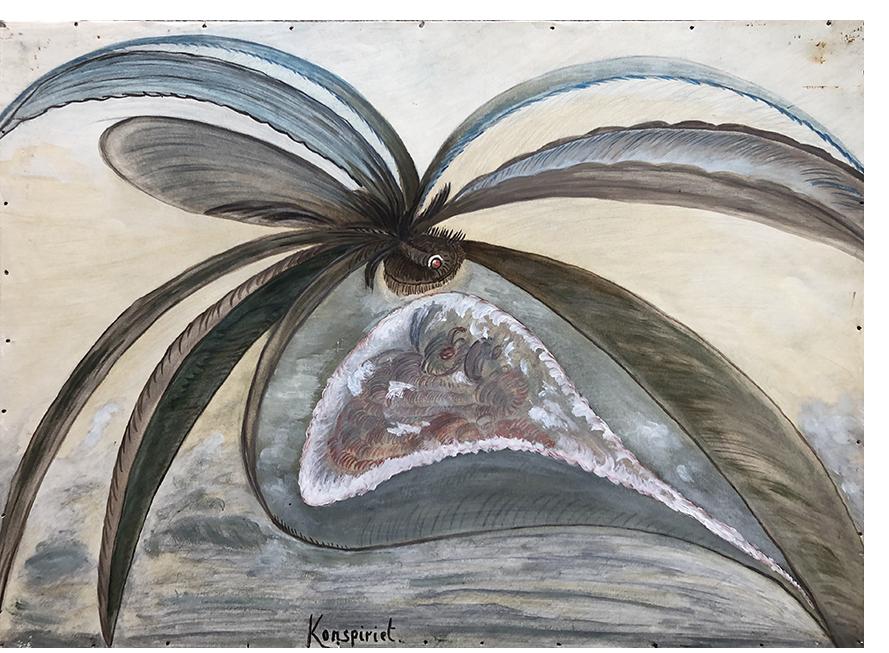 The German artist, Freda Köhler produced a body of compelling visionary paintings and drawings, only a fraction of which seem to have survived. She signed her works, ‘Sieg-bert’, which in old German means ‘bright victory’; a sign of the revelatory messages in her art and, perhaps, the name of her spirit guide. The titles of many of the works, and the hand-written ‘explanatory’ text on the verso of some of them, certainly suggests a mediumistic source. Botanical forms dominate. They metamorphose and seemingly reveal cosmic messages. They are similar in many ways to much work from Central European spiritualist circles, by artists like Anna Häckel, Anna Zemánková and Cecilie Marková. It is clear from her work that Köhler also shared a characteristic early-twentieth century fascination for those scientific discoveries and technological advances that revealed reality as mutable and in constant motion, from splitting the atom and X-rays, to electric streetlights and moving pictures. This was in common with other artists also interested in cosmological themes, such as Wassily Kandinsky and Paul Klee. In one image, for example, titled Disturbed ‘Cosmic’ Calm (Gestörte ‘kosmische’ Ruhe), she wrote on the verso: “No comment required. Unlawful Application of atomic research against the laws of nature will shake the cosmos to great misery.”

We know very little about Freda Köhler beyond what is contained in a short, typed label pinned to the back of one of her works. She was born Freda Spokl in Hamburg in 1912, began painting around 1932, and worked as a scene painter in Berlin. In 1945 she was bombed out of her Berlin home. After the war she married and settled in Hamburg, where she looked after the family home and painted. The note also tells us that she had frequent stays in psychiatric clinics. She died in Hamburg in 1992.

It is highly likely that Köhler produced these extant artworks during, or subsequent to, times she was hospitalised. There are, to be sure, certain affinities with the work of another German artist and contemporary who also experienced psychic trauma, Unica Zürn. It is possible that the body of work that we have survived because it had been in the possession of one of her doctors. These are not ‘psychotic’ images, though. While the works are clearly redolent of visionary experience, they are the product of an assured hand, and do not have that sense of visual and lingual disintegration and incoherence that characteristically accompanies the journey into, and experience of, full-blown psychosis. Rather, they seem to operate more as reports back from experiences of some psychic elsewhere.

Köhler/Sieg-bert illustrates the liminal moment of crossing onto the other side in one of her most figurative images, The Intermediate Realm (Das Das Zwischenreich). “From a spiritual point of view,” she writes, this intermediate zone is the “realm that people are still searching for and slowly approaching after their death.” A search which is, in itself, not solitary, but “community work.” Her sense of psychic liminality is nowhere more clearly stated than in a note on the verso of The Poem of the Sphere (Das gedicht der Sphäre):

The poem of the Earth is the inexorable surrender of the inner experience by earthly means. Thought gives way to thought, creating an emotional structure that draws out or inspires those who have felt or experienced it. But the creation of a poem takes place according to the same law (or principle) that is analogous to that within the sphere. So, the poem of the sphere is also the coming together of spherical waves of joy, in which the otherworldly eye works with the otherworldly materiality. The spherical inhabitants express themselves in coloured forms, since they are spherical waves and made of otherworldly material, and colour is the strongest expression of the otherworldly, accompanied by sound that we might call, ‘music’.

The importance of (cosmic) light is a common theme. Inevitably, this light – which equates with the life as well as spirit – occupies only a fragment of the composition. Large, dark forms dominate. For example, in the case of Faith in the Protection of the Light, a blue glowing jewellike form resists the dark subterranean landscape and the unblinking eyes of the troglodytes that inhabit it. Similarly, in Fear of Light, the yellow rays in the top left corner render immobile the large zoomorphic form that dominates the composition. “Light is truth,” she writes on the verso, “How many people suffer from this fear when they lose the path of truth for the sake of material gain and bend before the moment that will expose them?”

A recurring form resembles pointed flower petals. They are clear in Propeller Amoeba Pair (Propeller-amöben-paar). In other works they undergo various zoomorphic transformations. A human-like visage in The Cry of Pain from the Beleaguered Stratosphere (Der Schmerzensschrei der bedrängten stratosphere). A proboscis-shaped, malevolent ‘Nosolith’ in Defence Against Nosolites (Nosolithen-abwehr) and Conspiracy (Konspiriet). Other than in its malevolent incarnation, the ‘petal’ form often acts as a kind of shell, or a dynamic counterpoint to stable, protective womb- or seed-like shapes, as in Liberated Soul (Befreite Seele), Spherical Meteorite (Sphärisches Meteorit) and Towards the Light (Dem Lichte entgegen).

The artist uses gouache in most of the works that we have. She ably balances linear description, fields of colour and graphic hatching. The overall result is one of visual clarity, even as the viewer is confronted with visionary forms that often verge on abstraction and whose iconography comes not from mundane experience, but unconscious depths. Two exquisite pencil drawings, titled Sun Mountains (Sonnenbergen) reveal the full sensitivity of Sieg-bert/Köhler’s mark-making. At once bold, free and precise, these serpentine abstractions share an affinity (there is no direct influence) with some of the final, tiny drawings made by another great German visionary artist, Franz Marc in his sketchbooks in the final weeks before he was killed in 1916 at the Battle of Verdun.

"Freda Köhler's works are part of a long tradition of mediumistic drawings, examples of which can be found in the Prinzhorn Collection at Heidelberg University Hospital. They are characterized by swinging and circling lines that result from free movements of the hand and arm. The creators of this type of work try to relinquish control of the drawing hand and leave it to other forces that seem to come from the hereafter. This is probably what Köhler describes on the back of one of her sheets as “human abandonment of inner experience through earthly means”. There are useful comparisons to be made with other work in the Prinzhorn Collection. For example, that of the former chamber singer Malvina von Carolsfeld (1825–1904), the first “Isolde” in music history, dating from 1897. With circular pencil movements she tried to establish contact with her deceased husband, and in some of them written statements and even entire sentences from him actually appeared in the on paper through the process. Another example is a work from around 1920 by a patient named Kölla by the Zurich psychoanalyst Oskar Pfister. She saw herself as a medium, but we know nothing else about her. She covers the whole surface of a large sheet of paper with undulating lines, from bottom left to top right. She then adds “animal-like structures” to this “uniform rhythmic movement” (Prinzhorn), similar to the ways in which Köhler works, although her images are also beautiful essays in colour.

“The drawings of Freda Köhler are a precious discovery. These amazing examples of mediumistic drawings are an important part of a tradition of which dates back far into the 19th Century. Early examples of her characteristic swinging and circling line can be found in some other work in the Prinzhorn Collection. It is therefore very fitting that I have been able to add her work to our holdings.”

Catalogue:
An Exquisite Realm: The Art of Freda Kohler