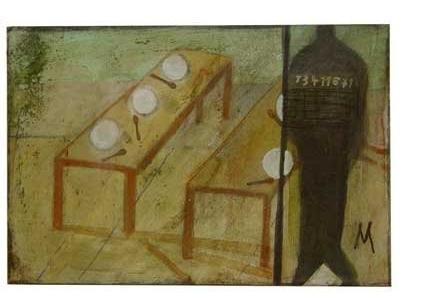 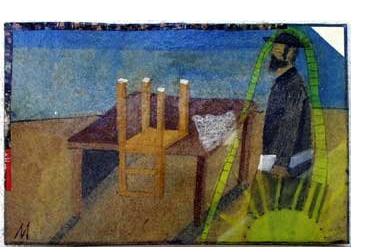 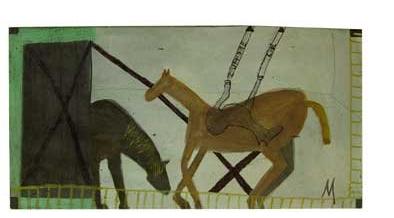 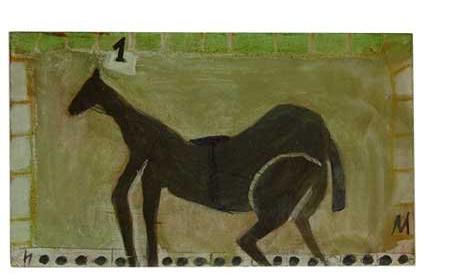 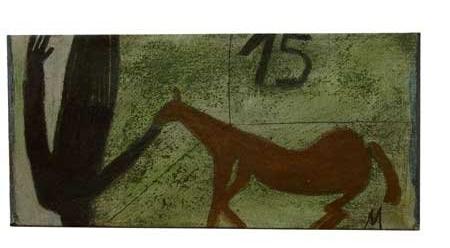 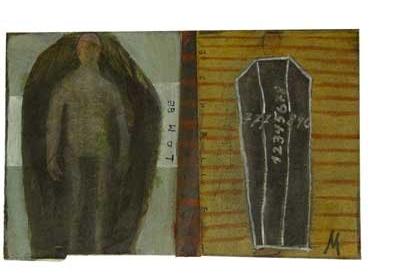 The outsider artist known as "M", was born in eastern Europe. His age today is 55 years.

His family was destructed by the results of Nazism like death, flight and persecution.

"I was grown up by my mother and grandmother near Dresden. Although I didn't know my father personally, I spent a normal childhood, later in my life I understood, it was not as normal as I thought...I never was a child". After absolving school he worked in different jobs. Not able to stay at one place for a longer time he couldn't integrate himself into the social systems around him. "It seemed to be a dead-end way. So, when I was 19 Years old , I left home.I had a long trip and saw a lot of cities in Europe: Vienna, Milan, Amsterdam, London, Paris. At this time I liked to visit churches as shelter and there I looked up to the paintings and sculptures, it was like another world, some kind of communication took place, I didn't really understand, but it was important for me...". "Later I visited museums. First at winter time only, because it was warm there contrary to the churches. There I found again this undefined world talking to me, giving me emotions I never had before..." He became a tramp between different worlds: doing occasional jobs for his daily life and beside being a painter, but only in his imagination.

"I had no academic art education like the painters I saw in the Museums, as well I felt myself an artist. Into my dreams I was a painter, who was able to fix the floating pictures I saw behind my closed eyes. I tried to do copies at the museums but those didn't bring the results I wanted, it wasn't my imagination what I saw there on my sketchpad.I did a lot, but I destroyed it. So it should take its time till I ventured to try to do it on my own...".

In his late 20th he discovered the south of France "...a place which called me..." He is still living and working there. An independent existence, he doesn't look for audience nor discourses about his art.The small sized watercolor paintings on cardboard are the result of his "un-housed" life. "I am at home into myself !" He has no stable domicile and supports himself by little jobs and social institutions as well. Staying a tramp between different realities of places, pictures and thoughts, he is traveling between several towns, villages and "outdoor - stations", in a well developed system of movement, which he needs to survive. He doesn't accept to be photographed or taken on a movie, and even when I explained to him the necessities for selling his paintings he said: "I don't paint for sale. If You pay, I thank you, but it's your problem." Since about three Years he works more or less regular but not obsessive. He suffers not of a mental illness in a medical sense, although he sees and understands the world in his own way.

Beside this biographical details I noticed before, which I heard from him several times and now again, by my insisting questions, he invents stories, like he does his drawings and believes in it. "...I only paint what I see...!"

When I asked him to sign his drawings, he chose "M" because I gave him the nickname "Monsieur"- in revenge he is not a "Monsieur" at all.