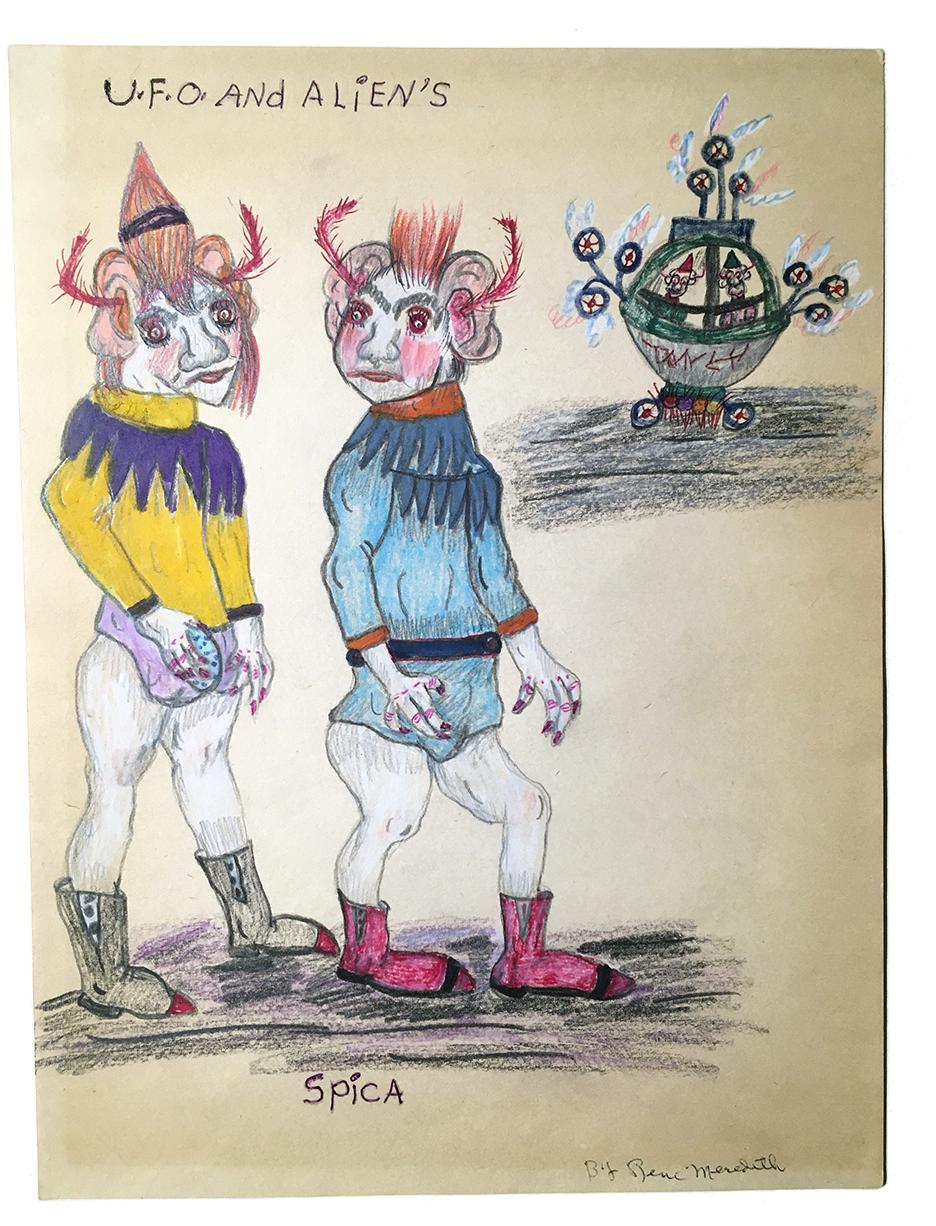 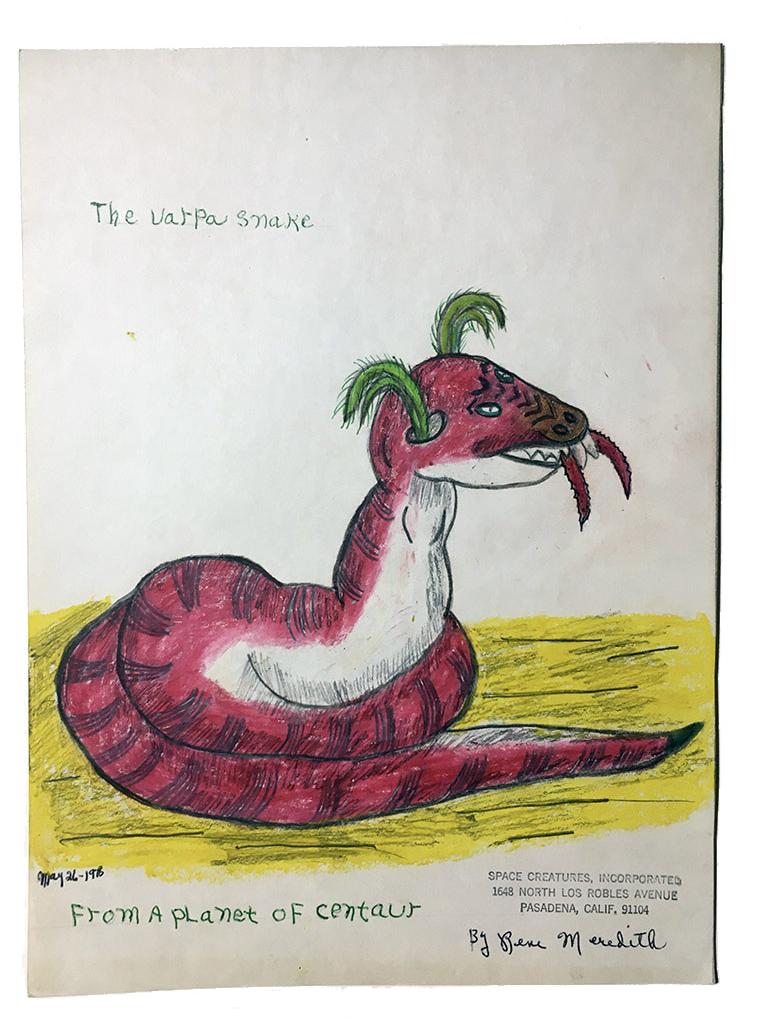 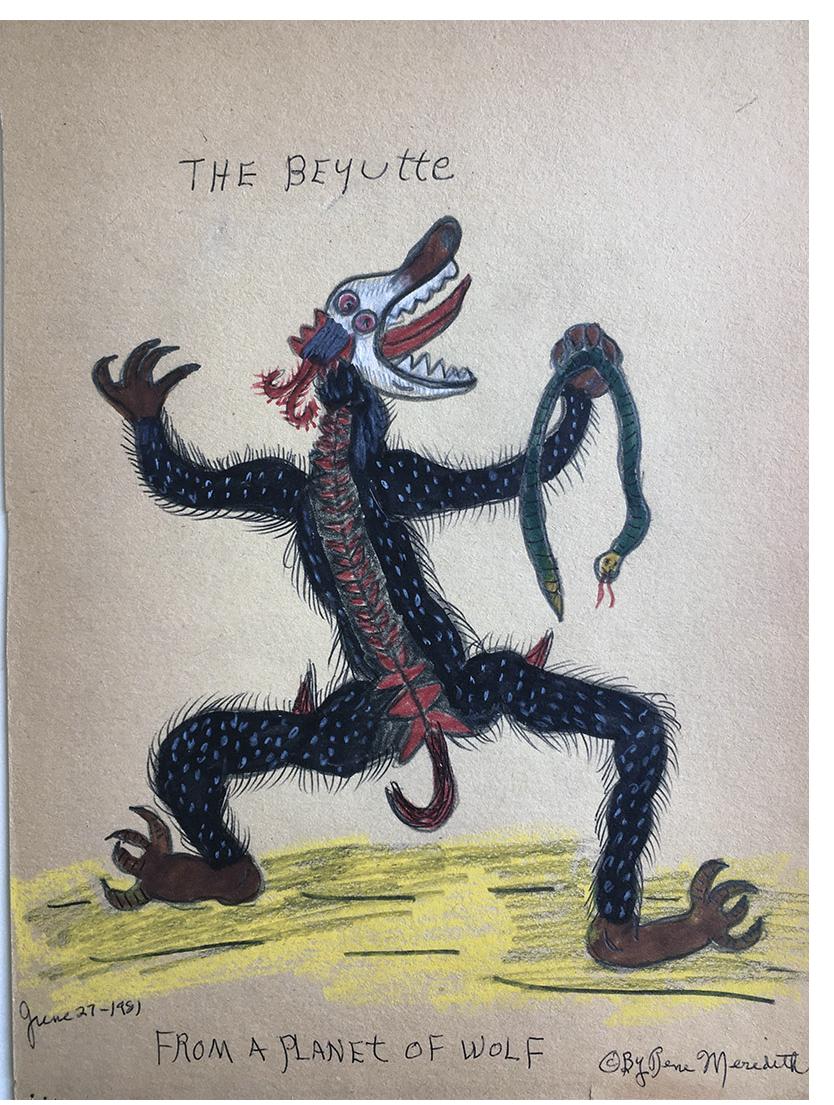 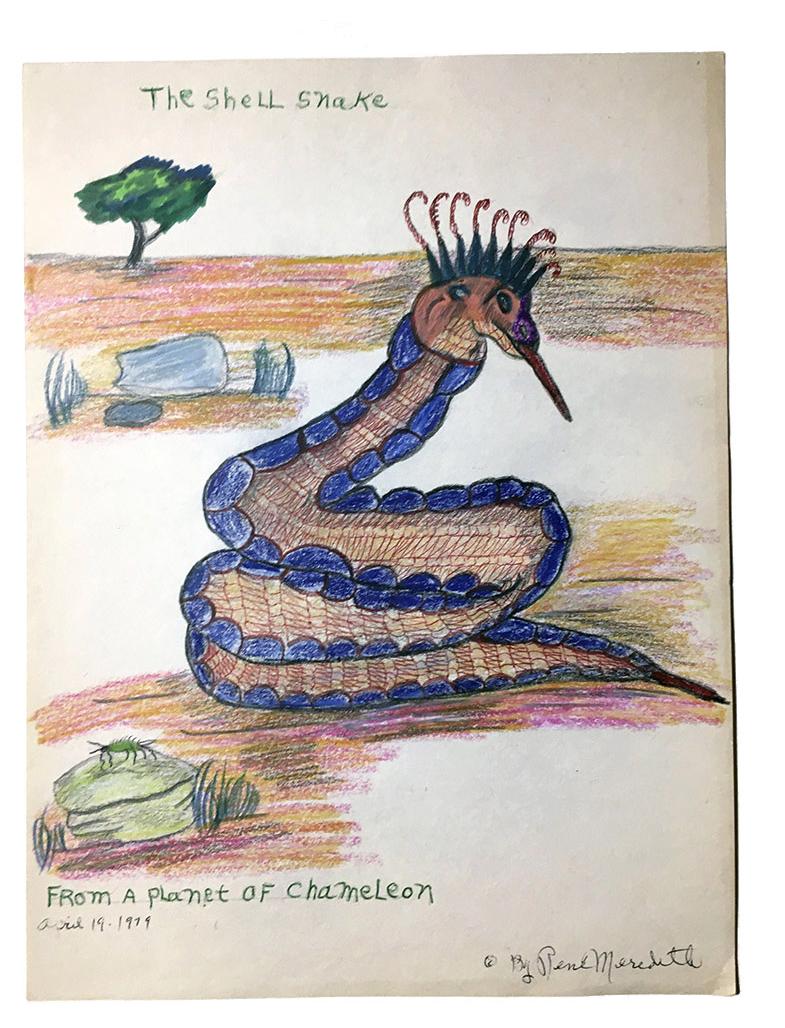 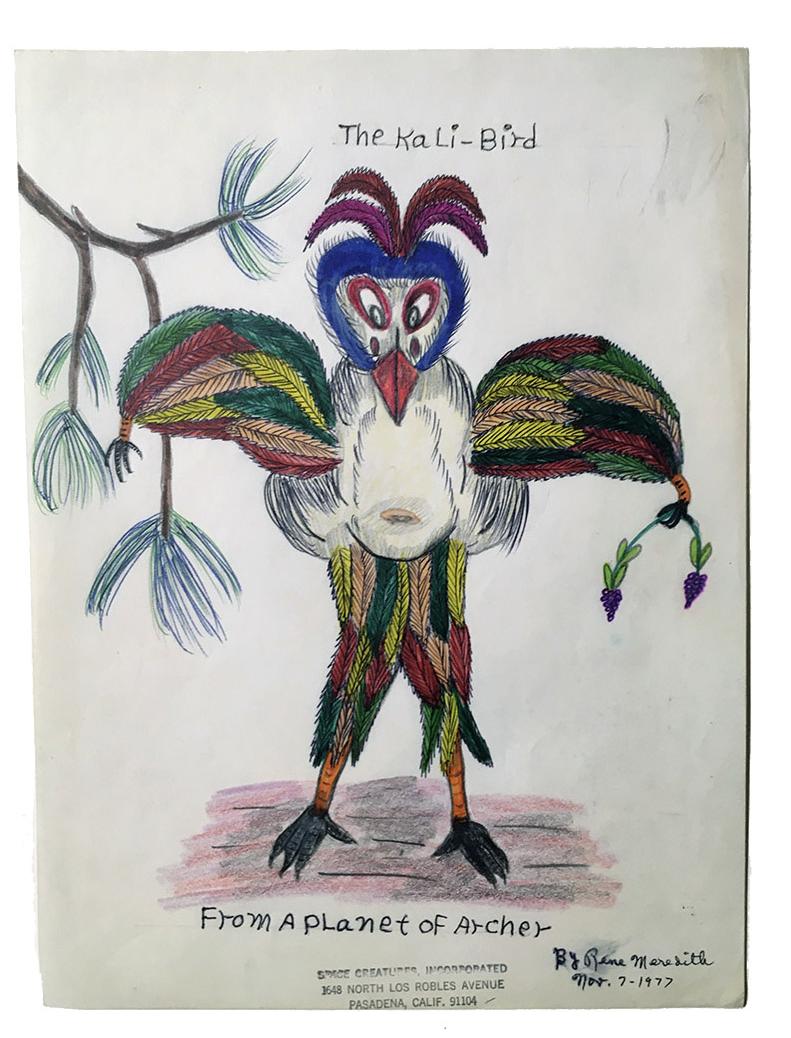 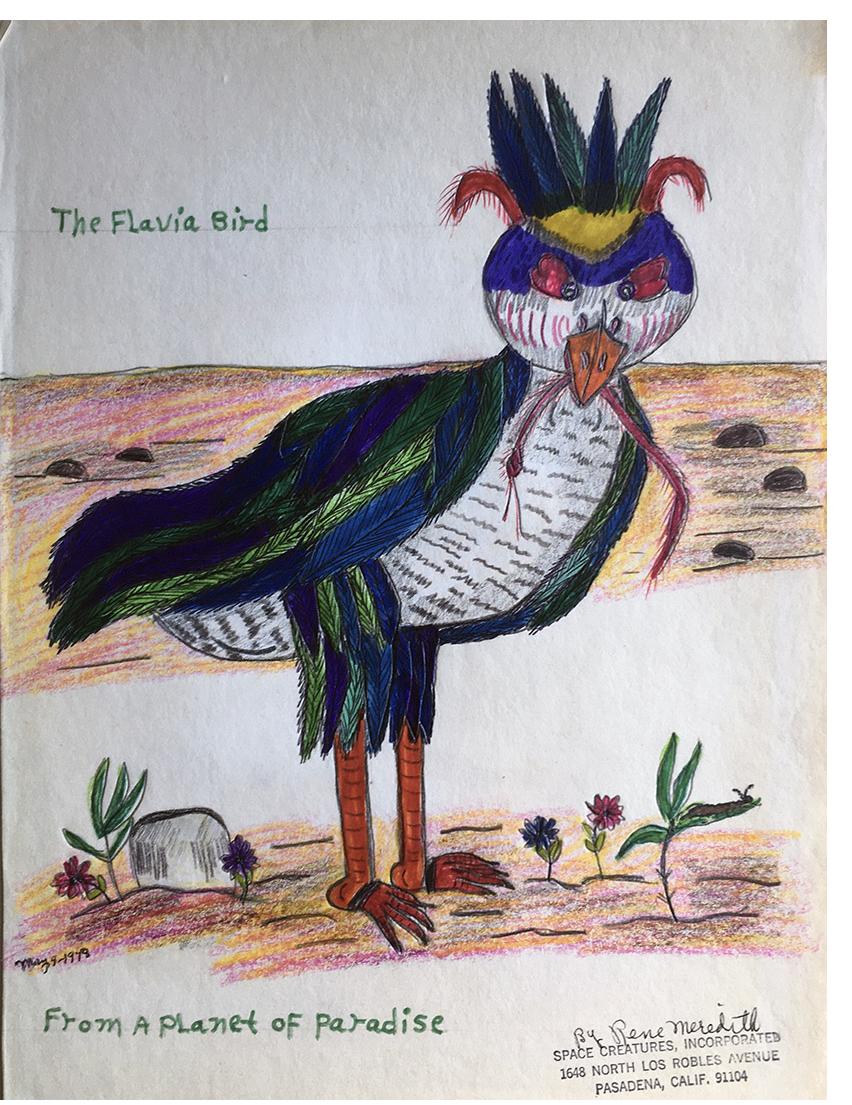 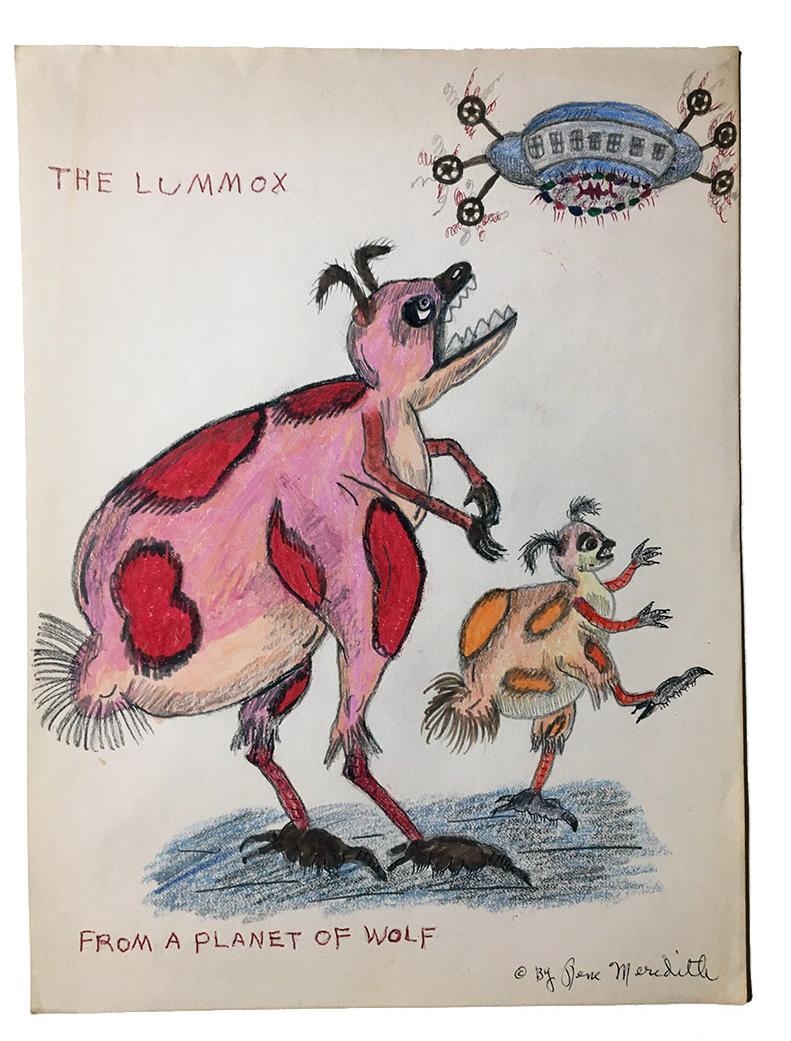 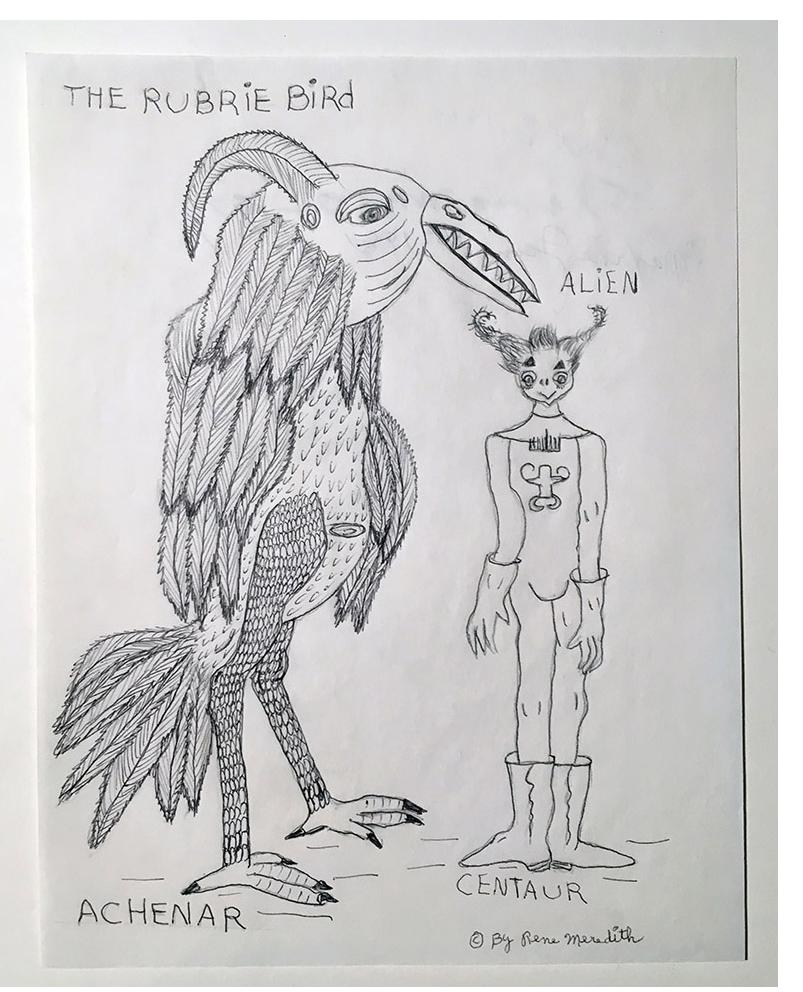 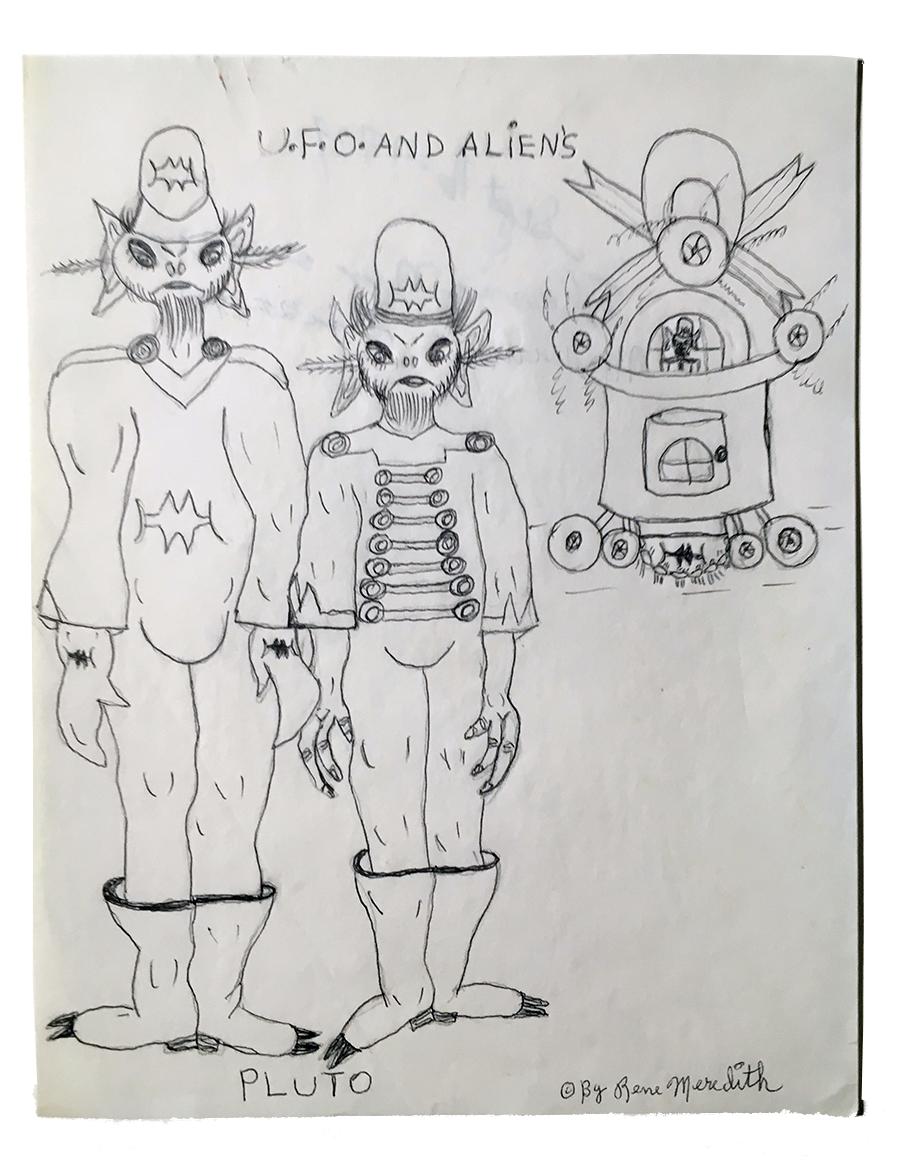 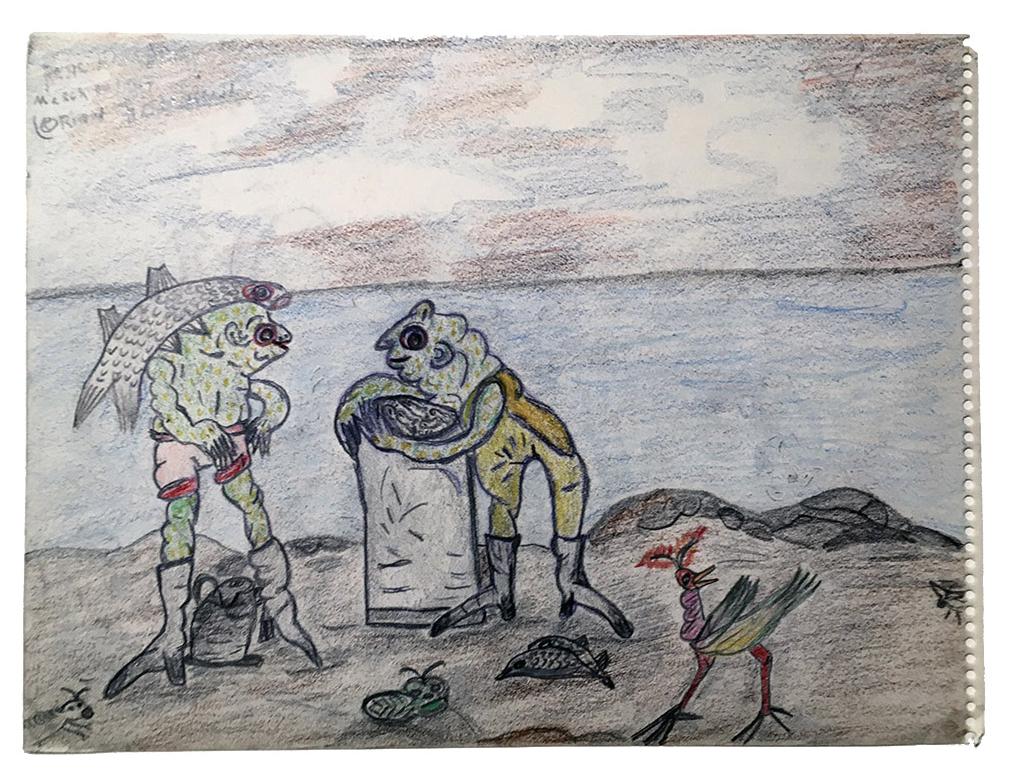 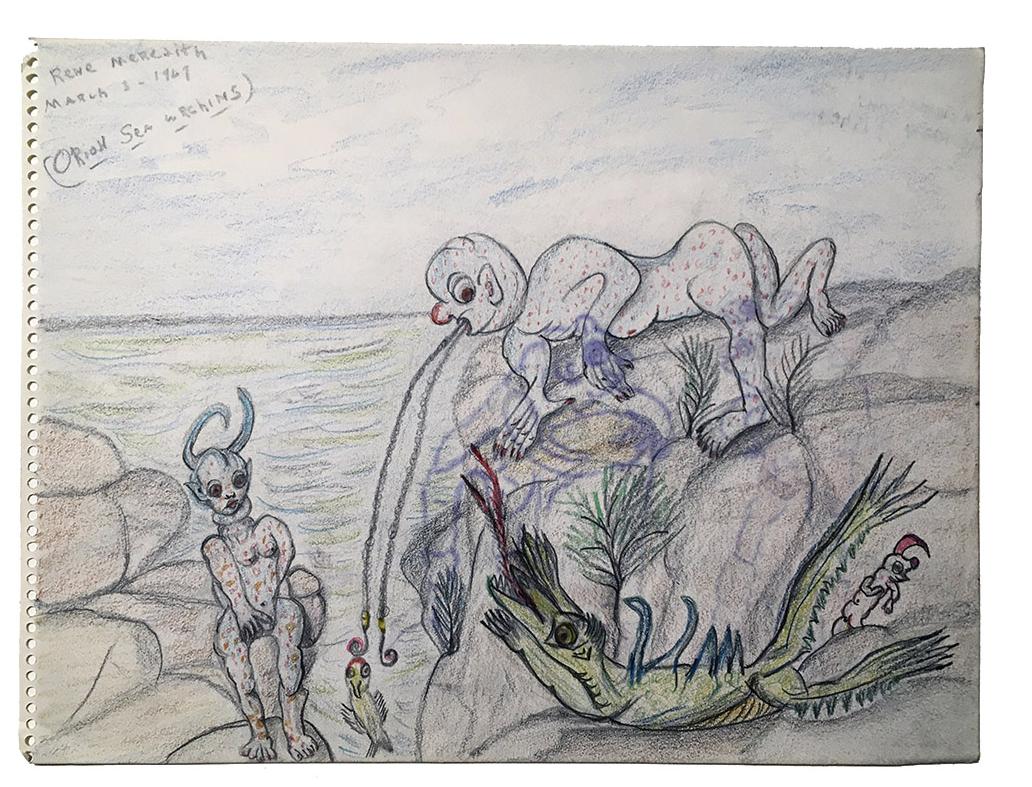 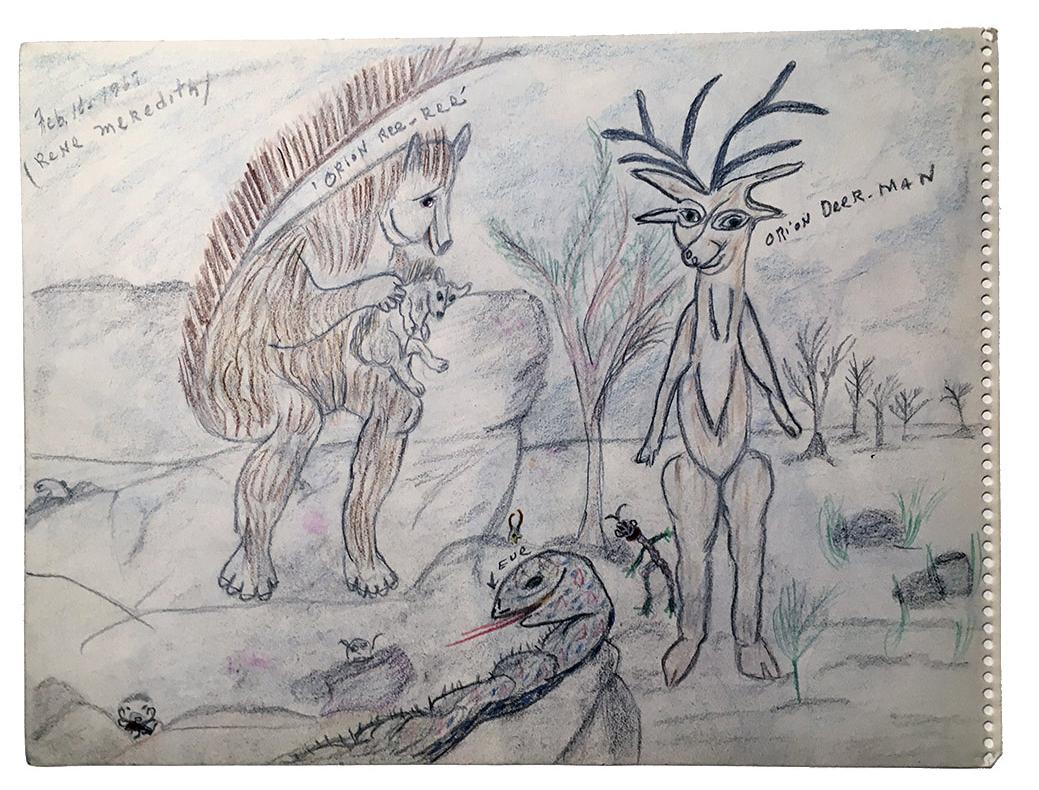 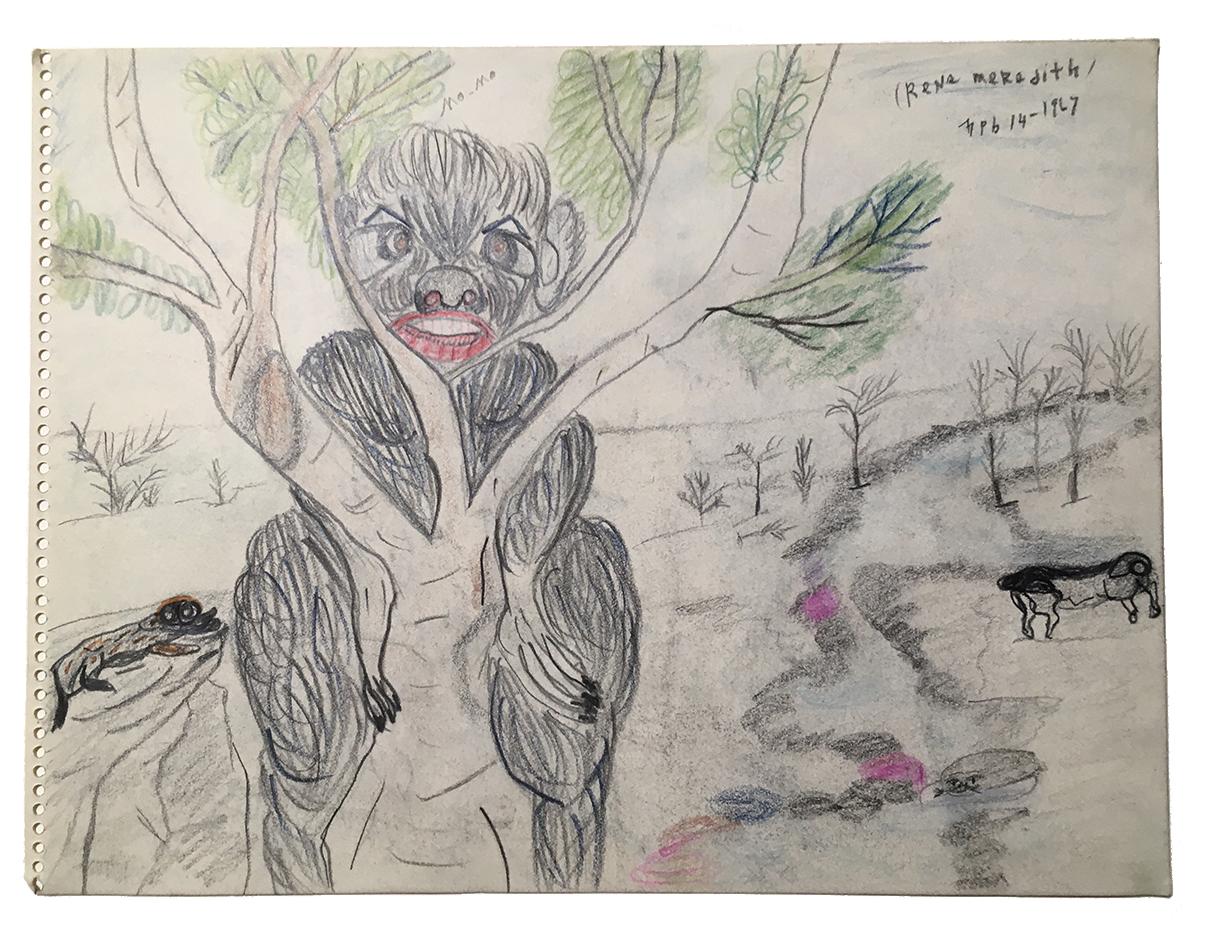 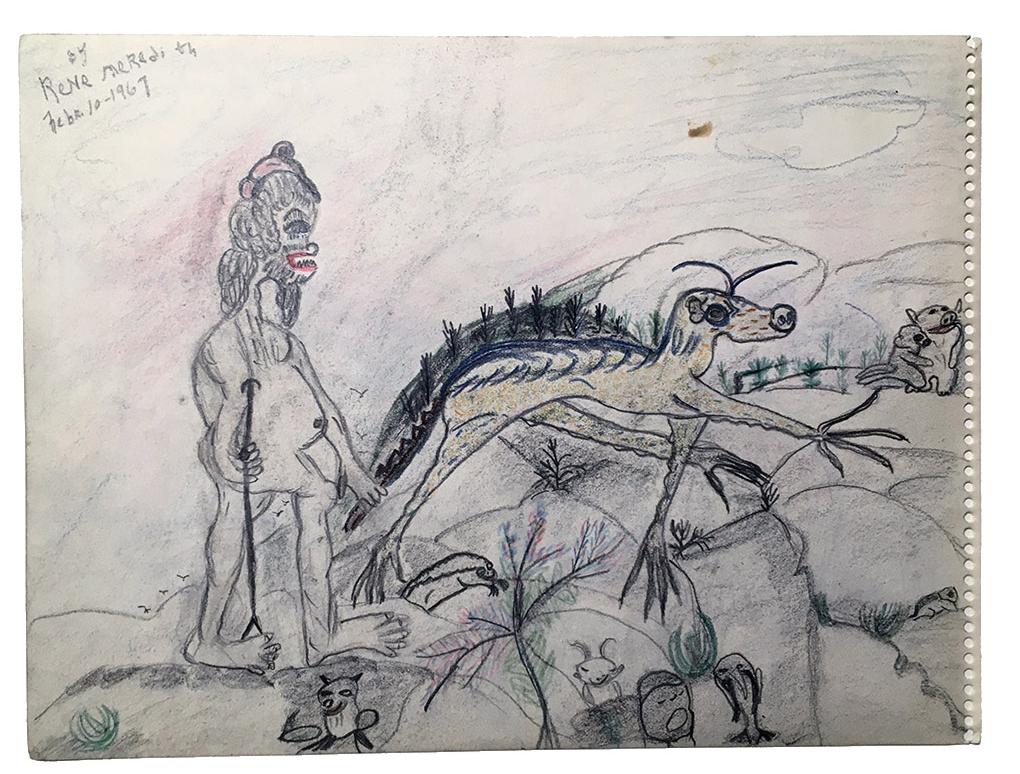 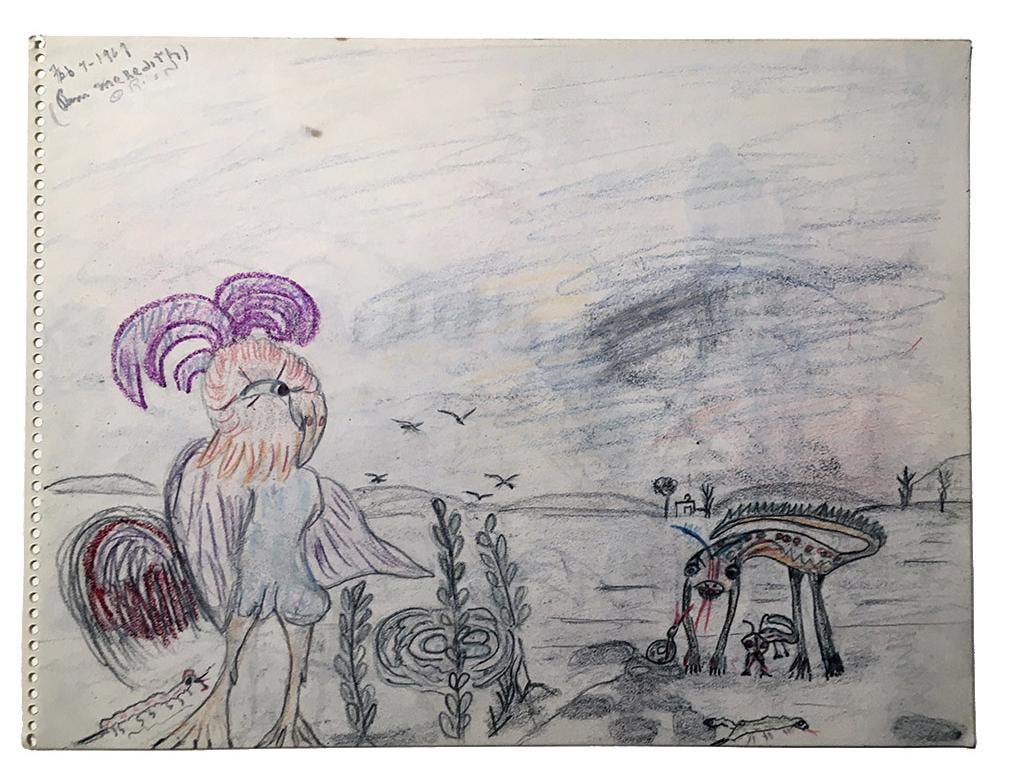 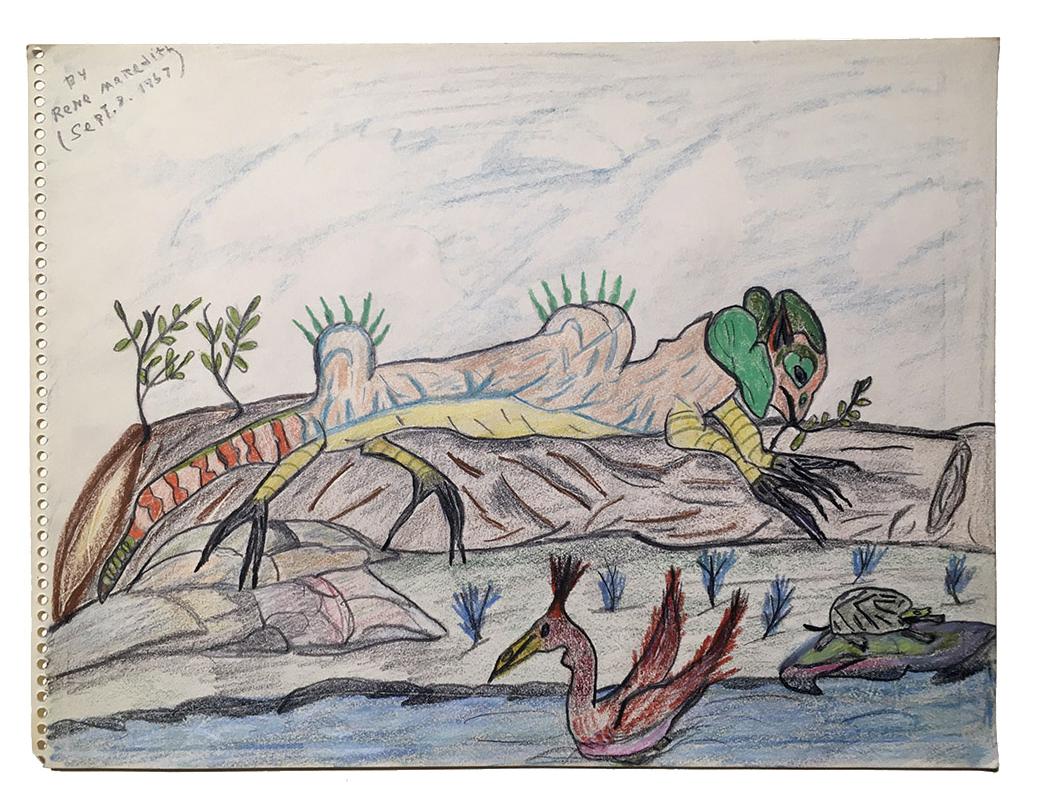 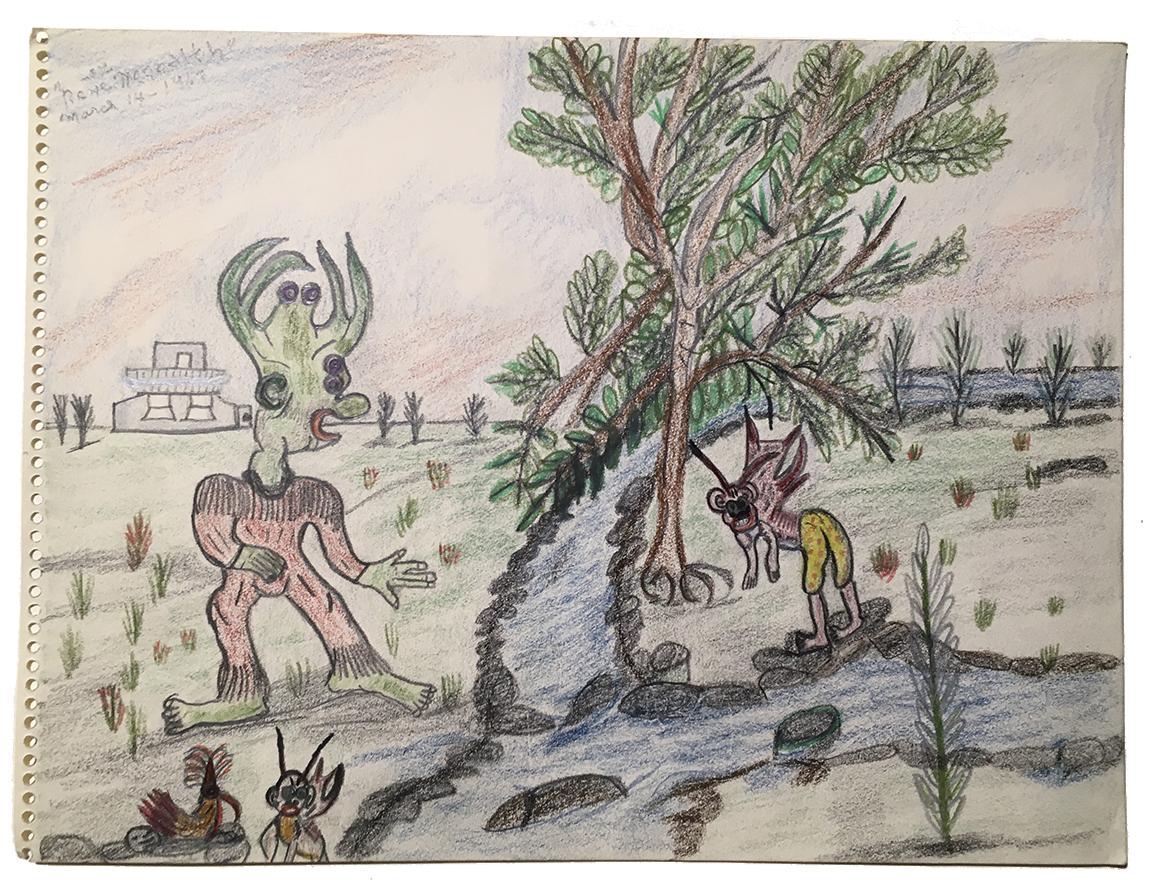 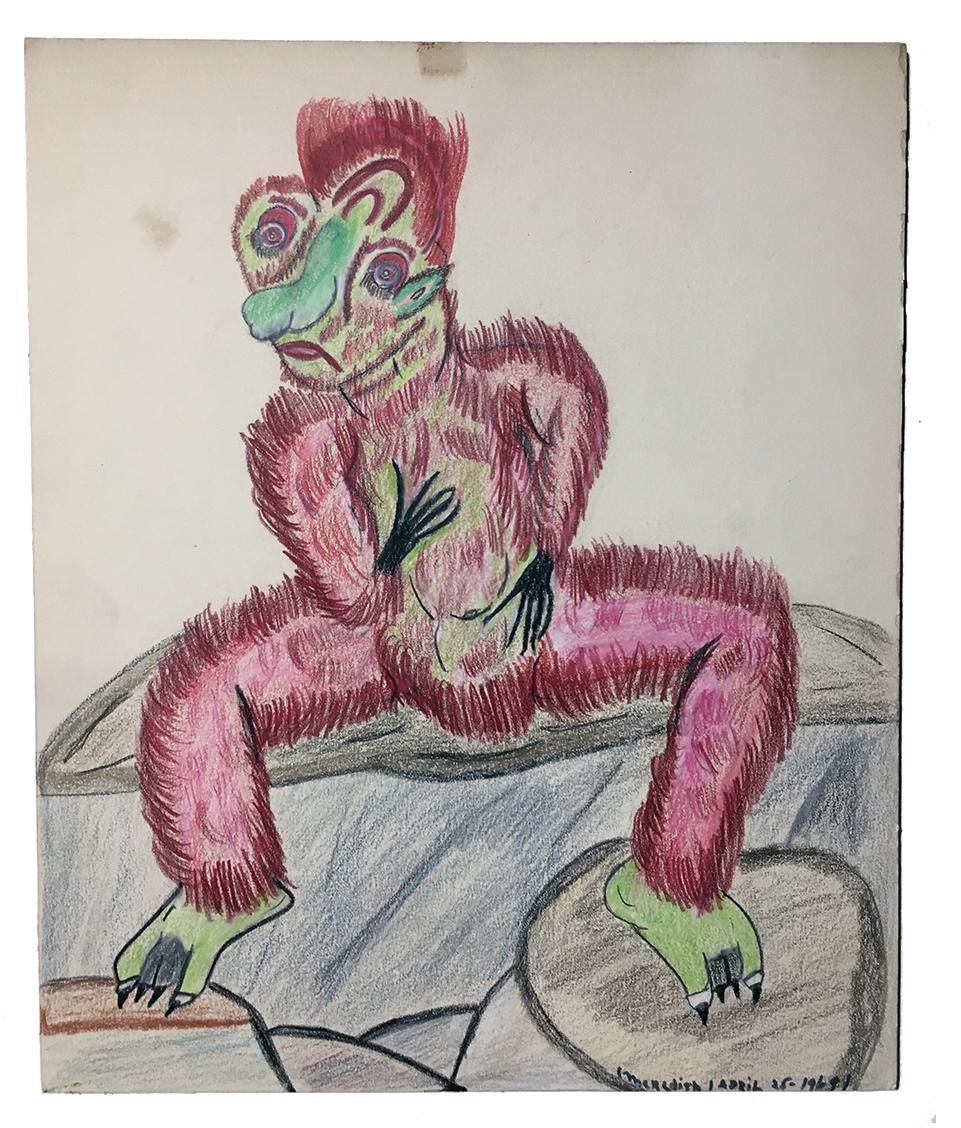 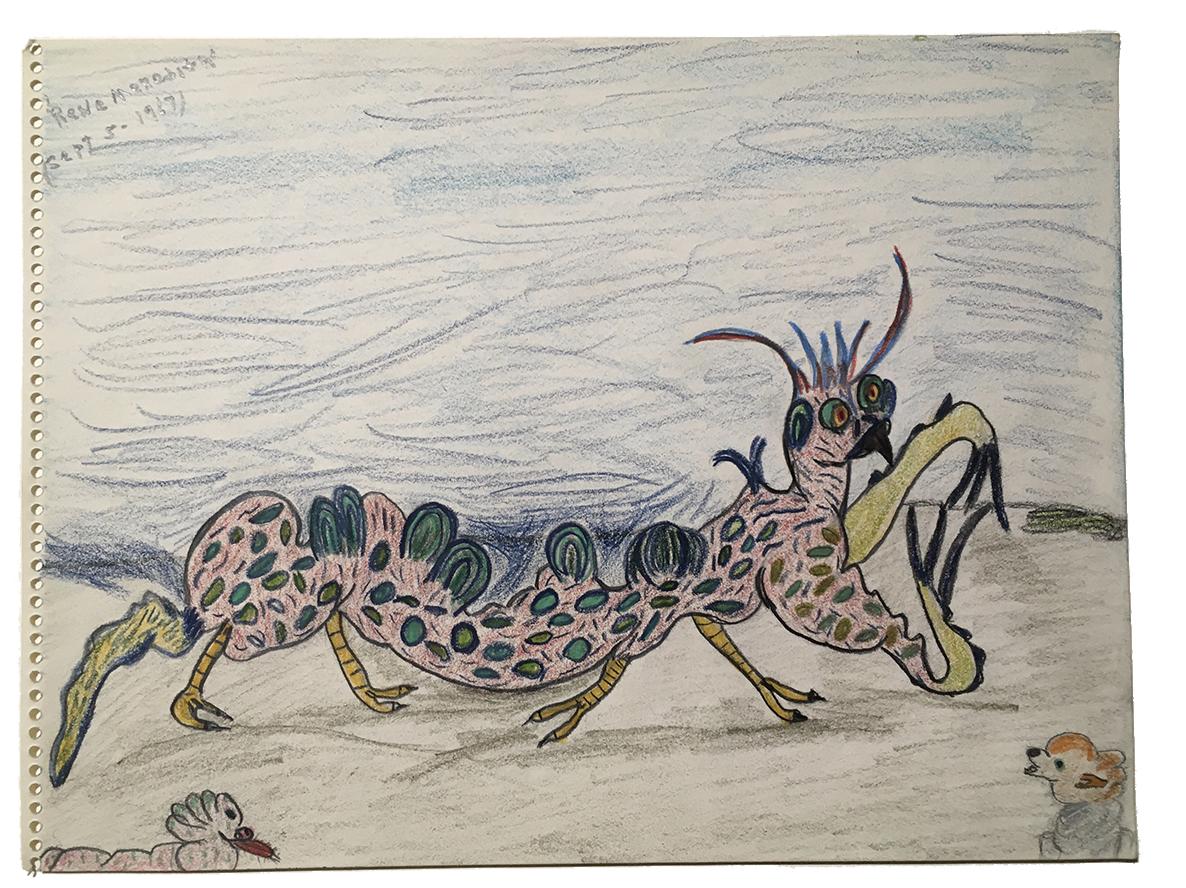 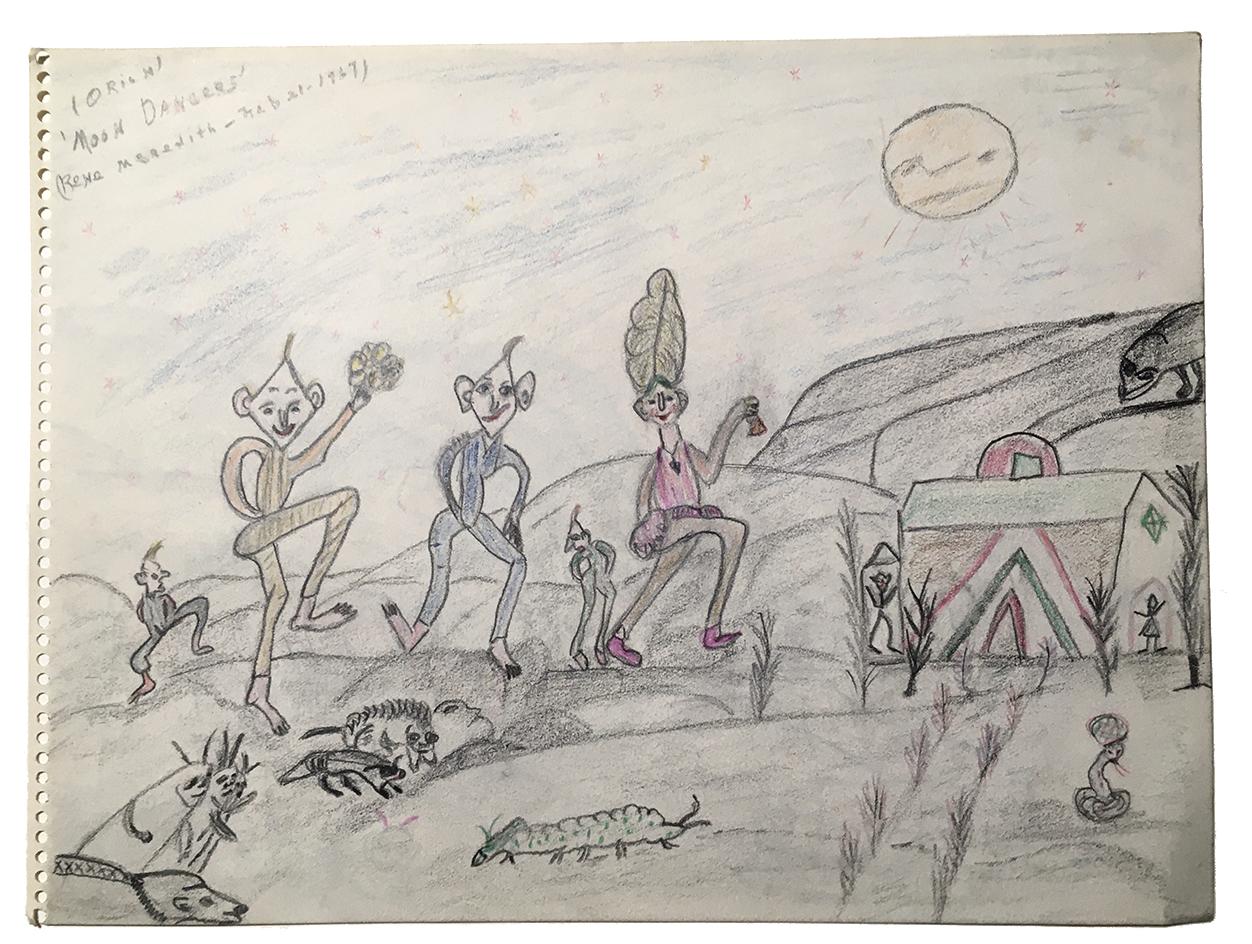 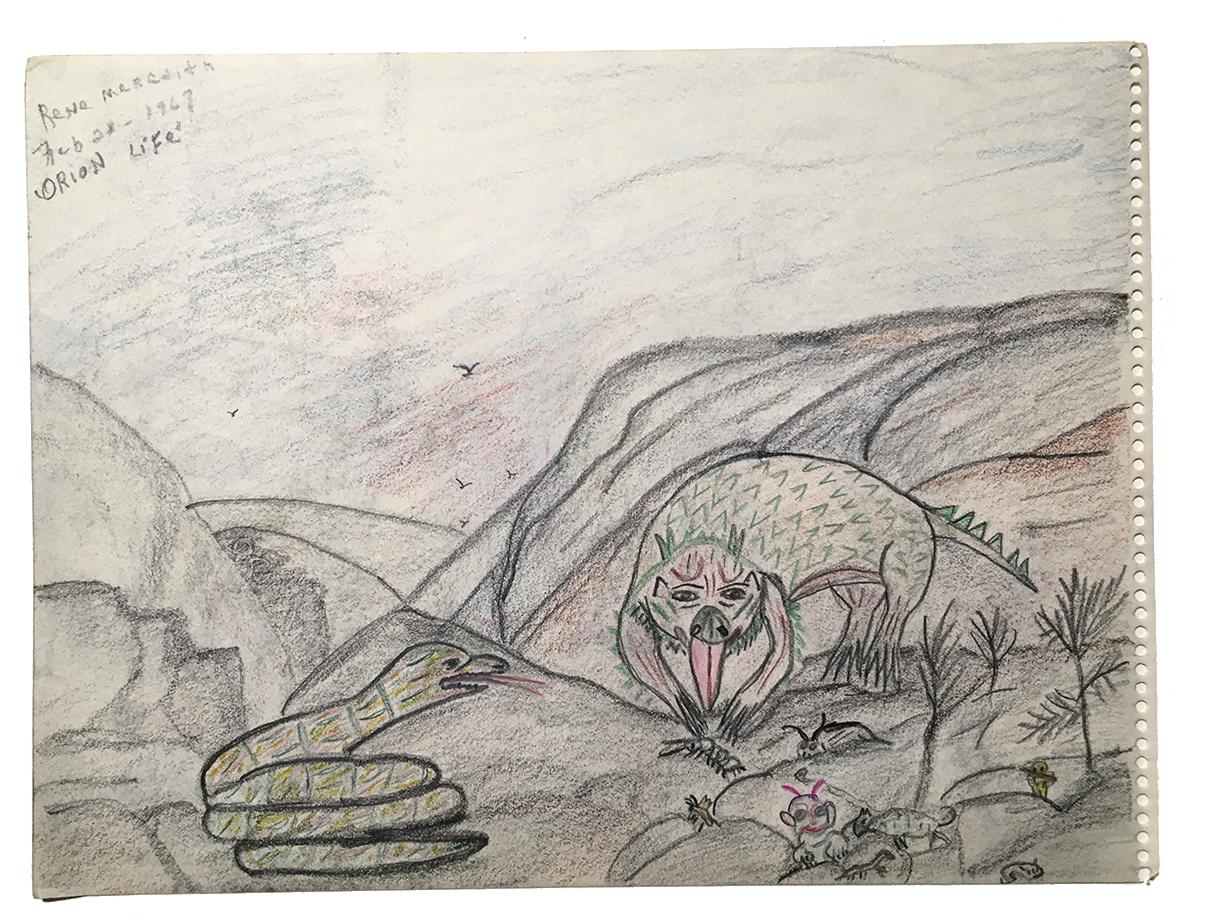 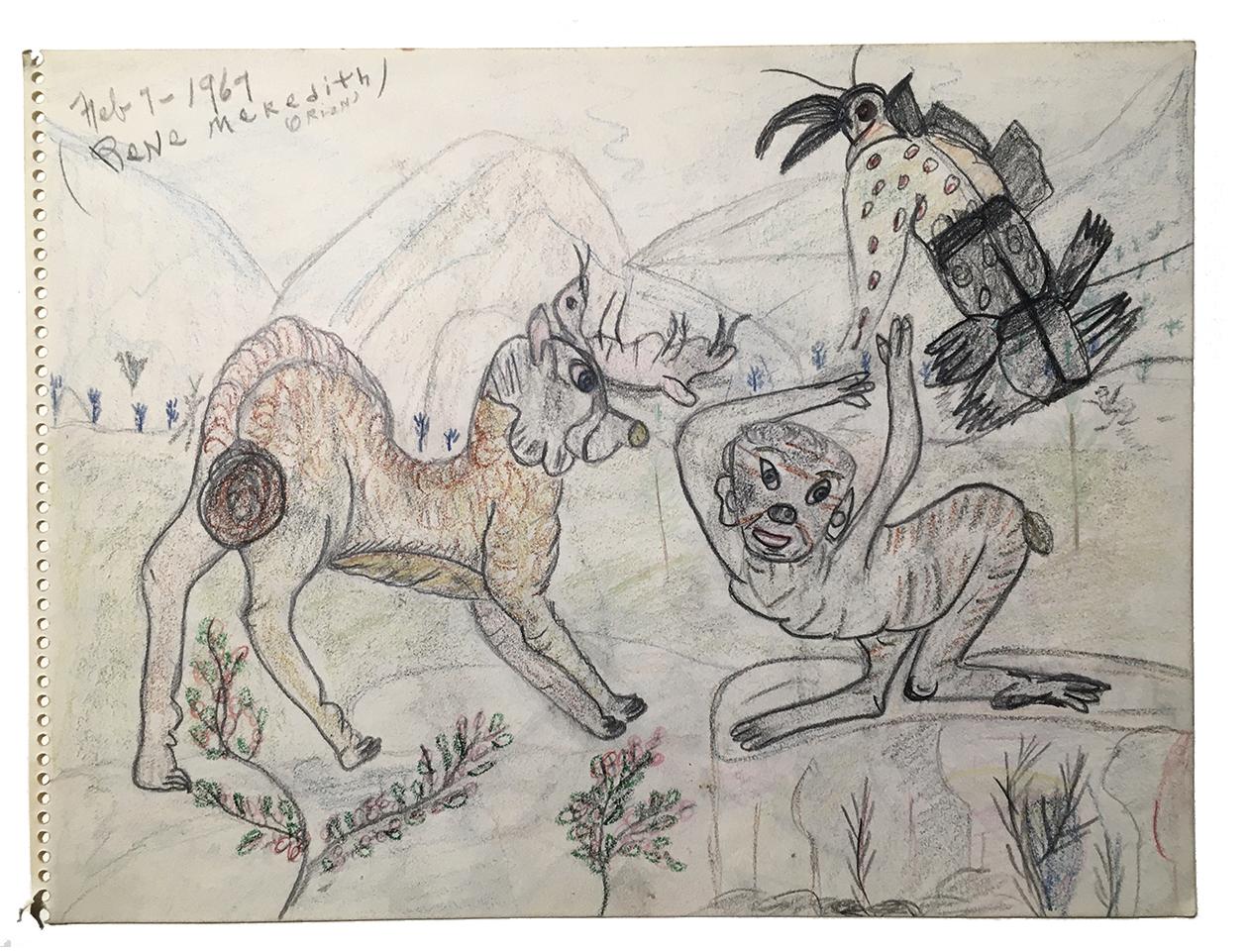 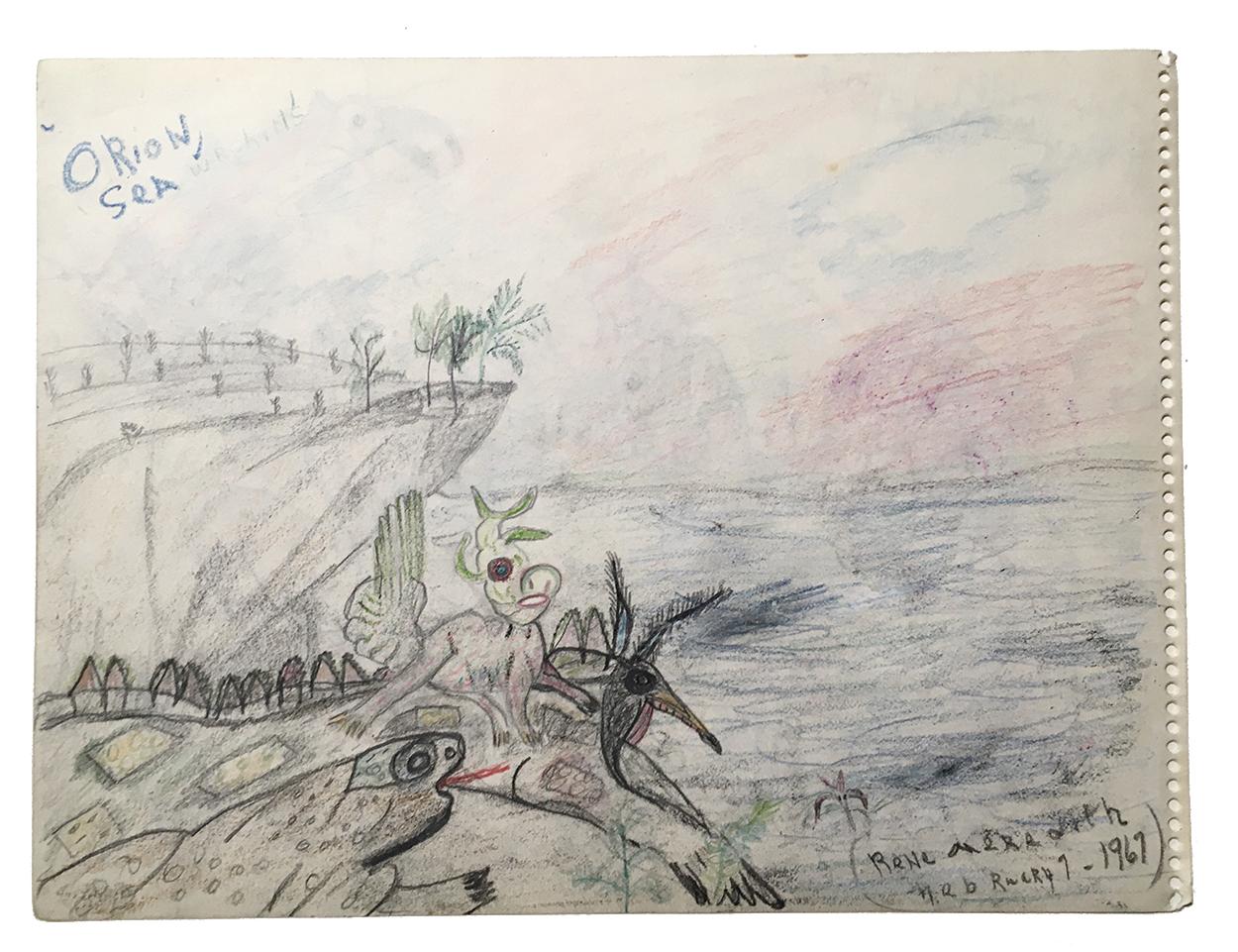 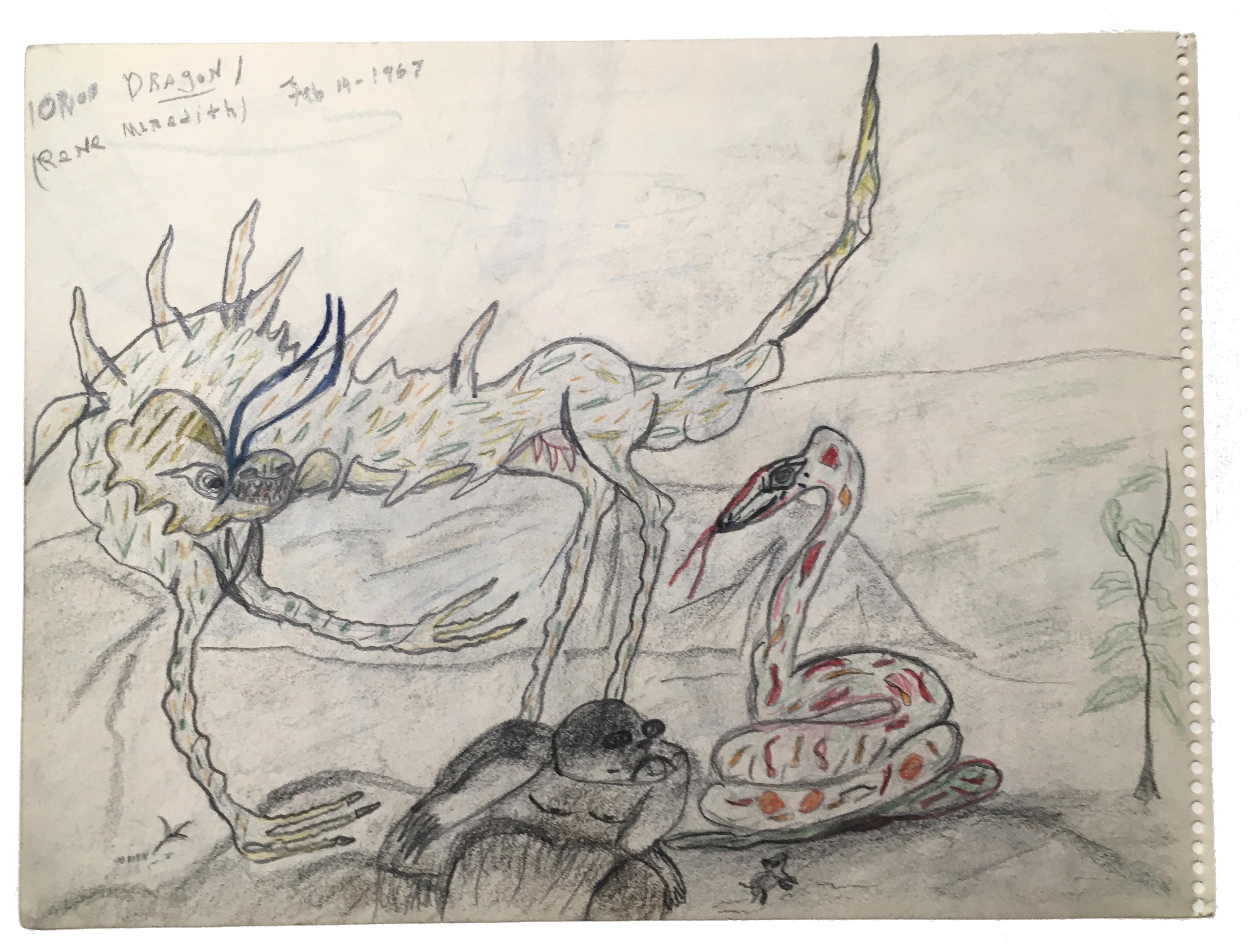 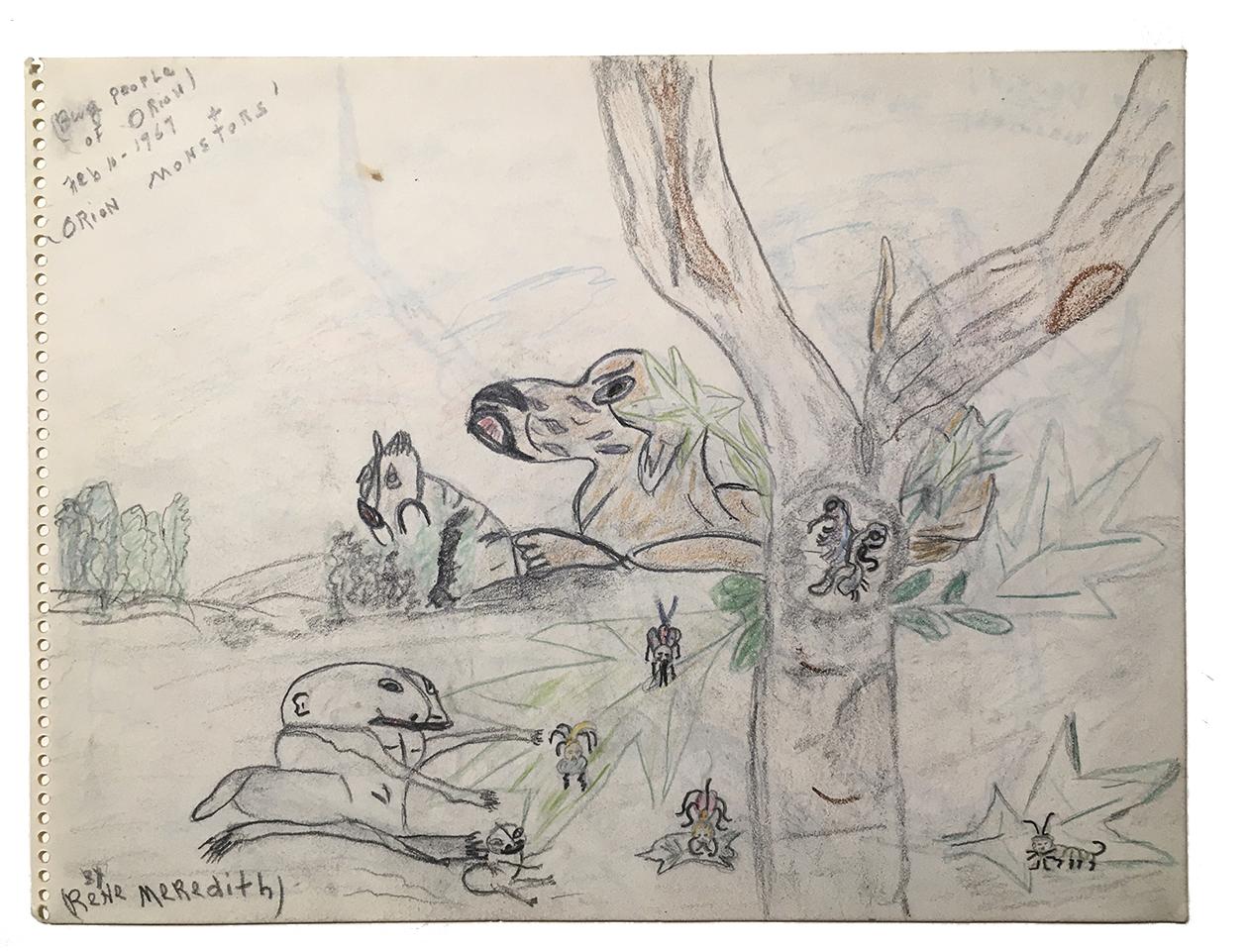 Rene Meredith is a revelation, a previously unknown American self-taught artist, only recently discovered. One hundred and fifty of her remarkable pen and crayon drawings were found in a discarded folder in a Los Angeles flea-market. Nothing at all is known about the woman who created these works, apart from her then location - two addresses in California - the dates the pictures were drawn, and the fact that she thought them important in her life and valued them. It can also be seen that a number of the sketches are stamped 'SPACE CREATURES, INC' and also bear a Copyright stamp.

The drawings, with their vivid, mobile evocations of otherworldly, monstrous or hybrid beings, bring to mind the work of medium and psychic Helen Smith, who also produced such sketches of alien worlds, and strange creatures from Mars and other planets.

On a loose scrap of paper, found amongst the drawings, were the following words, written by the artist in red ballpoint pen. They give a remarkable and poignant insight into the creation of the images and the artist's feelings about her work:

'When I was a child I used to lie awake at nite and think about the beautiful stars, and the moon, and wonder where they were and what was upon them.

Then in the sunset of my years there were strange visions of creatures. The visions of other worlds would come until they became such a reality in my life, I began to sketch and then later try to put them down the best way that I could.

I would like to share my world of visions and dreams, fantasy and fiction with you, call it what I may. But oft times I wonder could some of it be fact? Who knows.

Well then, come with me for a journey, a visionary journey to other worlds far beyond our reach, into the Great Unknown'

The invitation to share Meredith’s visionary journey through her art is not one to be missed. The cosmic menagerie that brought such joy to her sunset days will undoubtedly evoke awe in the viewer. One can also sense the excitement of the artist who, in the afterglow of her visionary reverie, turned to the business of capturing these otherworldly space creatures on paper. Each work ends with the flourish of an official ink stamp, giving an air of authority to her planetary odyssey, similar to the mediumistic artworks of Helen Butler Wells and Norma Oliver, or a NASA report of a UFO sighting. The rediscovery of Meredith’s visionary wonders is important and should help secure her rightful place alongside other great visionary explorers such as Ionel Talpazan and Helen Smith.

Meredith’s visionary creatures demand your attention as the eye follows the strange contours and colours, but they are also joyful and playful, each with a different character and story to tell. Some bear her specially made ‘ Space Creatures Incorporated’ stamp, welcoming each fantastical addition into her menagerie.

The compulsion in Meredith’s artworks to record her other worlds is somewhat reminiscent of the mysterious animals and Martian landscapes done by psychic and Medium Helene Smith, back in the 1900s .

I like to think that Meredith’s universe is out there, waiting with its glorious inhabitants, to be re-discovered by us.